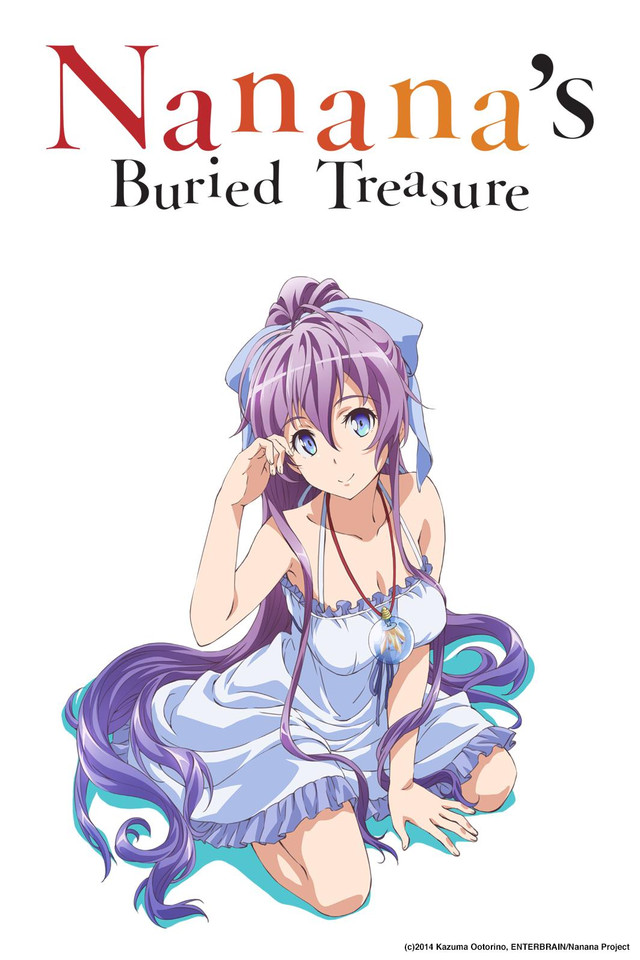 Nanana’s Buried Treasure is a show I found while I was looking for a new mystery show to watch. Unfortunately there aren’t many mystery shows out there. I’m not sure if this truly counts as mystery but it was enjoyable nonetheless.

There is an island named Nanaejima, it’s a “special student zone”. The island was the brainchild of a beautiful young girl named Nanana Ryugajo who was mysteriously killed in her apartment. This is where the story takes place.

Fast forward 10 years, a boy named Yama Juugo is forced to transfer to the high school on the island. With a fixed income, Yama is forced to look for a low rent apartment and to his surprise, there’s a girl already living in the apartment. It’s Nanana and she’s bound to the apartment so the two must learn to live with each other. She mentions these artifacts known as the Nanana Collection which are buried all over the island and he’s soon joined by a “master detective” and her “maid” and also an adventure club to look for these objects.

The characters in this show really do stand out here. While some of them fall into “types”, they aren’t totally cliche. There is a lot of backstabbing and double dealing amongst the characters due to the nature of the show. Treasure hunting is a cutthroat game. Nanana is the only one who doesn’t have ulterior motives in what she does but I guess she can’t since she’s a ghost. The others all have flaws, flaws that make them a bit more human.

Everything in the show is done well. The art, music and everything else are crisp. I couldn’t find fault with anything in the show except something minor and picky on my behalf. The opening sequence, I like the music but the first pic seems awkward or out of place. It’s a zoom in on Nanana holding a pudding cup. This would make sense if someone already saw the show but not before and even then it just seems weird. The rest of the sequence works but that one scene is awkward but it could just be me.

The show really does need a second season and I hope it’s coming. 11 episodes was not enough to tell the story and they kind of made that clear at the end. Unfortunately a lot of shows don’t get to finish telling their stories, especially those that run shorter than the usual. Just like Problem Children, there may not be enough of a pull to get another season. This show was buried by some strong shows of the 2014 season.