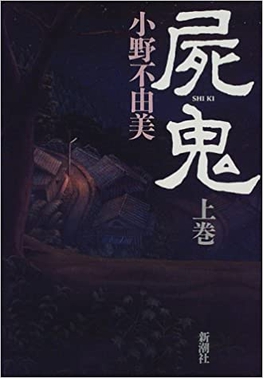 If you’re looking for a horror anime then Shiki may fill your need.

Shiki is about a little village in the middle of nowhere. Everyone seems to be living a nic elittle life but no one seems to be trying to do more or get out and go on an adventure. Megumi wants to see the world, the lights and communicate with people of a higher social standing. One day a mysterious family moves into town, well the outskirts of town and strange things start happening. People start getting sick and others start to disappear. Just what is going on in this little town? Will they be able to figure it out and stop it from happening?

It’s hard to pin down a main character here because most of the village ends up disappearing, getting possessed, vampired, taken over or whatever you want to call it. The first girl you meet is Megumi and she plays a big role in the show as well as the doctor. As you go through th show there are other characters who step up and take the lead or remain vital to the story.

I would say the art could use a little touch up but not much, it fits the creepy ass vibe this show has. Almost like a Higurashi vibe. The music and everything else around the show is just as creeptastic. The pacing is a little off in some spots but there are flashbacks to help get you up to speed.

For the most part I liked Shiki but felt something was lacking in some parts. I guess that’s because it’s listed as mystery AND horror. Usually a show falls to one side more than the other but this one is almost 50/50, so that may be my fault. I may have been expecting more than what the show actually is. It’s a decent little show and I’d probably watch it again but as a recommendation I’m not sure. If you’re into mystery and horror shows then watch it but you do have to pay attention to the early episodes for everything to make sense later.