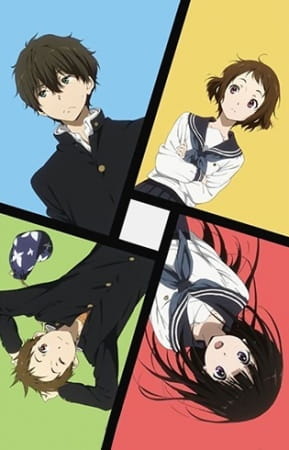 I found Hyouka while I was looking for more mystery shows. I went in with no expectations so didn’t have any thoughts on it before watching.

One day Hotako was urged by his sister to join the Classic Literature Club to keep it from being dissolved. He was joined by Eru Chitanda who just happened to be in the club room when he went to check on it. Followed by his friend Satoshi and a girl named Mayaka that Satoshi and Hotaro both knew from middle school. The four start solving “mysteries” and when they do, the four of them end up being asked solve certain “mysteries” around the school by other clubs.

Hotako is the main character though his spotlight gets stolen by Eru, he lives by one simple phrase “If I don’t have to do something, I won’t, but if I have to, I’ll do it quickly.” Eru who may be good on the academic side is not very coordinated and seems to lack common sense about outside situations. She’s the daughter of a wealthy farming family so she may be sheltered. Eru kind of drives things by always pushing Hotako to help with cases by staring at him and saying “I’m curious!”. Satoshi is a guy who is always happy and calls himself “database” since he’s full of useless info and then there is Mayaka who is in love with Satoshi and seems to hate Hotaro which leads to a lot of fighting between them. The four characters do work well together so they get points for that.

The show doesn’t have an overarching plot, it’s a bunch of mini quests tied together which has it’s positives and negatives. Along the way it does feel like it might become a romantic situation but that doesn’t develop. The art, backgrounds, music and everything that accompany the show are done well and fit the motif. The show itself just lacks something to grab you and draw you in.

I really wanted to like Hyouka but it ends up being mostly simple “mystery” stuff, nothing supernatural, no curses or anything like that. There’s not even a sophisticated crime or something to solve. It really ends up kind of being like a “chunnibyou” type of thing. Like junior detectives trying to solve the case of the missing stapler. Dammit Hyouka, why why why. It’s not a bad show but it doesn’t take any risks, everything seems to be done with traditional Japanese culture in mind so some things may even seem outdated. If you have the time then watch it but it’s not one I’d be salivating over.