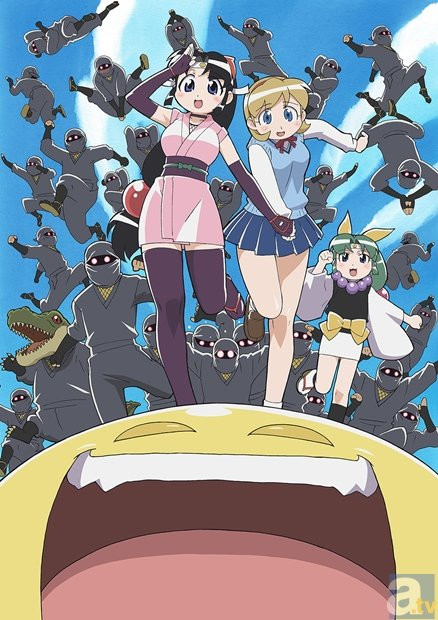 Ninja Nonsense doesn’t sound like the name of a serious anime does it. Well it’s not, Ninja Nonsense is anything but serious. I saw the name and just had to see what it was about.

The show revolves around a female “ninja” named Shinobu. She is sent on a quest to steal a girl’s panties and comes across Kaede. Shinobu thinks she’s invisible but Kaede watches her as she tries to sneak around. Taking pity on Shinobu, Kaede becomes friends with her or as Shinobu says “more than friends but less than lovers” and she means it, trust me but this is where their adventures begin.

Shinobu is a really sweet, innocent teenage girl who somehow became a “ninja” with a weird little round, shape shifting, perverted, ninja master Onsokumaru. Shinobu really isn’t ninja material, she’s not very smart but she is tenacious. It seems like she takes care of the other ninjas more than they help her train. You also have Miyabi, Shinobu’s overprotective little sister, Sasuke who seems to be the lead ninja since none of the others have names and Kaede, Shinobi’s new best friend who ends up being like a den mother for Shinobu, Onsokumaru, Sasuke and Miyabi since she is the most responsible and sets everyone straight most of the time.

The show may be from 2004 but it stands up well when compared to some newer shows. The art is what you expect from this type of show, mainly focused on the characters and not the background but the backgrounds aren’t just mailed in, they’re decently done. The show is kind of like the short gag comedy shows with each episode being separated into two parts, so it’s like two 11 minute shows per episode. There really is no plot, it’s kind of just a show that rolls from one situation to the next.

The show is called Ninja Nonsense for a reason. The show really doesn’t make sense but it is kind of funny. If you’re in the mood for some nonsense that involves ninjas then this is the show for you.