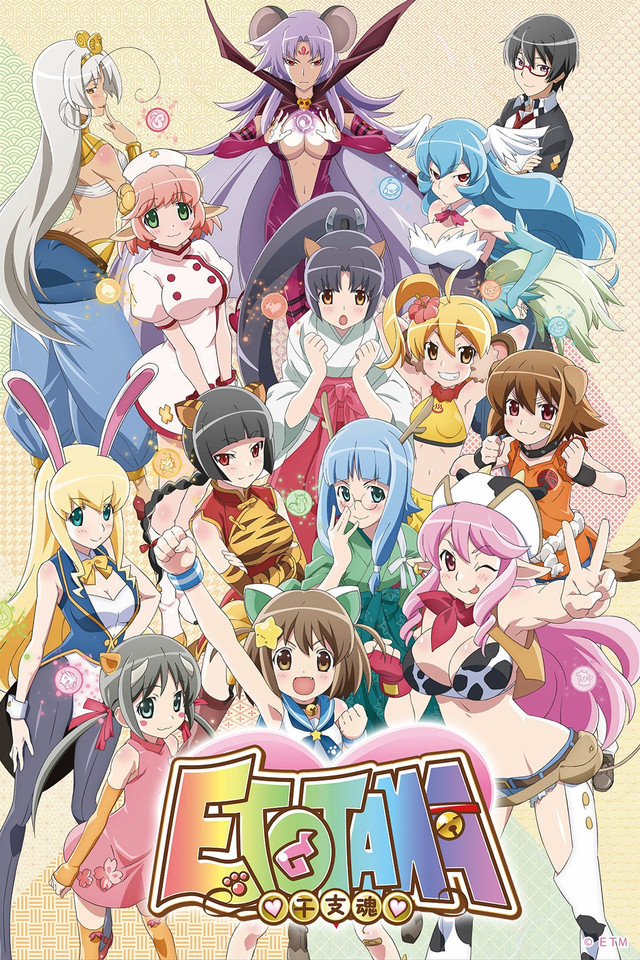 Etotama was on the list of spring anime so I checked it out. I checked all the spring stuff as a way of reporting back to others on what I thought and this was one of them.

Etotama is a quest of Nya-tan to regain her memory and become part of the Chinese zodiac. One day she meets Takeru and ends up basically invading his house along with the other members of the Chinese Zodiac. The characters are known as Eto-shin and they are there trying to help Nya-tan regain her lost past.

Takeru is a regular teenage boy trying to live a peaceful life until Nya-tan comes through his floor and disturbs that. He never has a moment of peace after she arrives. Nya-tan though…ugh. She has to be one of the most annoying characters ever. She’s right up there with this summer’s most annoying character Umaru (you may know her as hamster girl). Almost every time she was on the screen, I wanted to punch her in the face and I don’t hit women. Moo-tan was kind of funny, sometimes. Her perversions killed the funniness of her character. Why did she have to want sweaty socks. The other Eto-shin have their own personalities and all that but they have bit parts compared to Nya-tan.

I’d call the show basic for the most part. Everything in the show fit but nothing popped. The fighting part was just weird, how do you go from hand drawn anime to cutesy moe CGI fighting. Maybe some people are into that. “I’m going to fight now, I better turn cute.” Just strange….

The show wasn’t as bad as I thought it would be but it’s still not a very good one. If you want to take the time to watch it then go ahead but I wouldn’t watch it expecting a good result. Unless of course you like annoying characters and moe style fighting. The use of CGI pushes it’s score up because the presentation is done well, now if you combine the CGI skills with a decent plot and less cutesy fighting, you might have a good show.