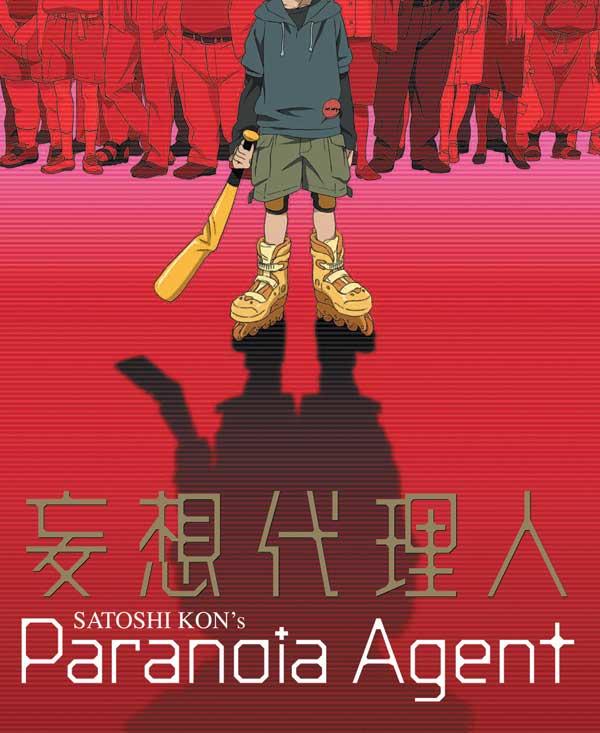 Paranoia Agent is one that I picked up because the cover image and genre. If it’s mystery, I’m probably checking it out. Now that’s not to say that all mystery is good but I will most likely check them out.

In Musashino, Tokyo, a juvenile serial assailant who was nicknamed “Lil’ Slugger” has been terrorizing the city. Lil’ Slugger is a kid who goes around with a gold bat and wears gold skates, he bashes people with the bat for a myriad of reasons. The show revolves around those who have been affected by Lil’ Slugger, whether it was because of direct attacks or stories they heard. There are a pair of detectives on the case and one “detective” who seems to be a porn producer more than another detective. As the show goes on and pieces fall into place, it gets a bit more interesting.

Tsukiko who’s the first victim of Lil’ Slugger, ends up being the main protagonist. She really doesn’t say much at all so it’s kind of hard to see her as a main character. The detectives seem to play a much bigger role and they’re the ones you’ll have to focus on, Keiichi Ikari and Mitsuhiro Maniwa. Then there is this other dirty ass “detective”. A real freakin pervert. He even shows dirty pictures to young boys of what looks like an underage girl. I already can’t stand the loli stuff though it won’t take away from a show but when you’re showing a young girl strip…no, just no.

The opening and ending sequences don’t really make sense to me. I’m sure there is some meaning to them but I haven’t figured it out yet. Probably something to do with paranoia. In the opening sequence, everyone is just laughing in weird locations and then the closing has them sleeping in a field. It’s just strange but so are a lot of things about this show but that may be because there are heavy paranoia and depression issues all over the place.

I know one or two people who like this show but I could not get into it at all. It even has high ratings on some sites for whatever reason. As you know, I like mystery and thrillers but this just doesn’t do it. The plot started off kind of strong but went south quickly. This show is completely passable in my eyes.