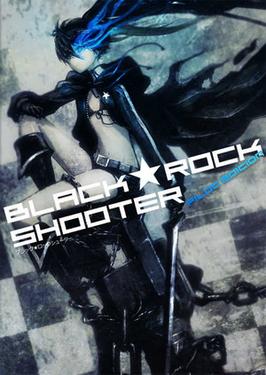 If you haven’t seen Black Rock Shooter than I bet you’re thinking it’s like a Black Lagoon type of show or something. Well, it’s not.

The OVA and the series center around Mato Kuroi but the stories differ. The OVA has a very happy and sweet Mato who befriends Yomi Takanashi. Well she’s very happy in general but in the OVA she just seems as if nothing could get her down. When the two friends decide to go play sports, they join different teams, Mato joins the basketball team and Yomi joins volleyball. Mato befriends a girl named Yuu from the basketball team and Yomi becomes jealous then suddenly disappears. The OVA serves as the background story and the introduction to the entity known as Black Rock Shooter.

When you watch the series, you will notice the story is similar in some ways but does differ a lot too since they have 8 episodes to tell the story and not just 30 minutes. In the series, Mato and Yomi aren’t friends yet and Yuu is Mato’s childhood friend. It also takes place from a standpoint of Black Rock Shooter not being introduced but already a part of the story.

This show delves into some personal issues like depression, dependency, abandonment and other dark subjects. So while it does revolve around girls in junior high school, it also has some deep subject matter. It doesn’t get all philosophical but the undertones are there. The OVA doesn’t really touch on the matters as much as the series does but that’s because the time limit.

While I did enjoy the show, I don’t know if I’d recommend it to people because the subject matter. I’m part of the gaming community and I come across a LOT of people with some type of social issue or depression and it may hit home for some of them. If these type of issues don’t bother you then by all means, watch it. But if you have a hard time dealing with these type of issues then you may want to pass it. Good show but heavy subject matter.