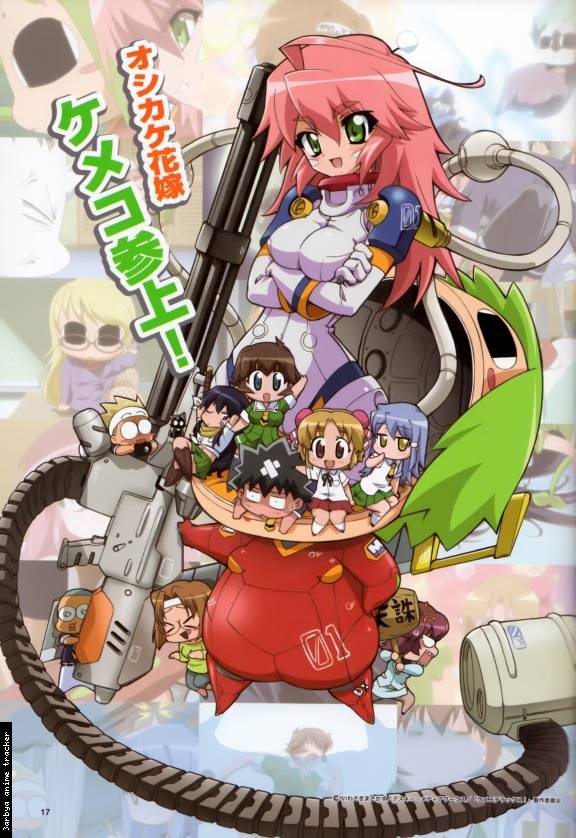 Kemeko Deluxe! is a show that I was 50/50 on because some of the main images are of a dumpy looking robot. Kind of reminded me of the bad cover art for Himouto! Umaru-chan, and we all know how bad that show is. I wasn’t going to watch Himouto at all until people started talking about it like they talked about Hestia. I almost had the same feeling here because the robot.

The story of Kemeko Deluxe! revolves around a regular high school boy who leads a pretty typical life. Then one day evil robots invade his bedroom and a spaceship crashes through the roof. This is where things take a turn, this dumpy looking robot comes in and saves the day then tells Sanpieta that she’s his wife. She introduces herself as Kemeko and his protector from these robots that keep coming after him.

Sanpieta is just a typical high school boy but he’s being hunted by an “evil organization” for something he doesn’t know he possesses. Kemeko, while being introduced as the dumpy robot is the pilot inside the robot. She happens to look like someone that Sanpieta knew 10 years ago and they were supposed to get married (probably a childhood thing they promised each other) but she keeps saying that it isn’t her. The pilot inside Kemeko is known as M.M. and she hides inside the robot most of the time. While in the robot she takes on another personality, one that is overbearing and not that likable. Sanpieta also has another childhood friend with him, Izumi. She walks to school with him everyday and is very overprotective of him. Of course there are other characters on Sanpieta’s side but they don’t bring too much to the story.

The show has a very easy plot to follow. While it’s mostly about school activities, there is a lot of fighting due to the fact that Sanpieta has to be protected from those who are after him and sometimes from Kemeko too. Everything else about the show is pretty average, nothing that stands out, nothing to write home about. It’s a pretty average show in general.

The show was okay but there was one thing that really turned me off and it’s that dumpy robot. Besides that it’s a decent little haremy type comedy. They ended it with a clear path to more episodes and there is enough printed material if they decide to do that.