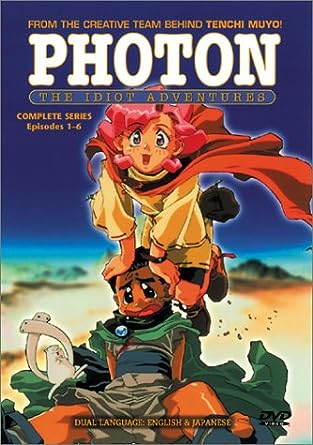 Photon is kind of like an off shoot of the Tenchi series. If you read up on Tenchi, you will find links to Photon on almost every page, as a show that’s similar. It has the same creator and also a lot of the terms and/or names are used some way in the Tenchi series. It’s most pronounce in Tenchi Muyo! War on Geminar.

The show is about a boy named Photon (bet you didn’t see that coming), who is sent on a quest to bring back Aun. Aun is a childhood friend from the same village who left on a journey to meet an idol she has a crush on. While on this quest, Photon saves Aun, ends up getting ‘married’ to a rebel space pilot, finds a long lost person who he seems to be in love with and gets to fight an evil wannabe galactic emperor plus an even bigger evil entity enters the fray. What more could you ask for in a 6 episode show?

Idiot Adventures can have a lot of meanings with this show. All the characters seem a little dumb in some way. Photon just seems “slow” but others are dumb. There is an energy called “Aho” and in the Kansai dialect it means idiot. Photon has “baka” written on his forehead which also means idiot. The people of Photon’s village regard a magic marker as a “Holy instrument” not realizing it’s just a marker. So there are a lot of references in the show to the lack of intelligence. People will probably think of FLCL as a comparison. I don’t see what others see in that show but this show is not like FLCL.

This show is all about the characters, forget the plot and all that, the characters make this show. Photon is a seemingly dim witted kid or adult  (this is never made clear) who has superhuman strength and an unflagging loyalty. In the Japanese version he comes off more like a “slow” kid but in the US version he seems more like an adult than a kid though his stature wouldn’t give that away. In Japan they’re okay with kids being naked in shows (I wonder if that’s why they let lolis run around naked) and Photon has a few scenes where he’s naked. If you notice, there are pictures of him with the word “baka” on his forehead. That is actually in the show for almost the whole series and it does actually end up having some kid of meaning. This was done by Aun, the childhood friend he’s supposed to protect. Aun is annoying in the Japanese version and even more annoying in English but she is a major contributor in the show.

The other characters that Photon comes across have strong personalities and presence. Keyne is a rebel space pilot who says she’s marrying Photon and is always seen trying to be close to him and prove that she can be a great wife. She reminds me of Ryoko from the Tenchi shows (we all know the original Ryoko from Tenchi Muyo! Ryo-Ohki was the best character in the whole series). Her rivalry with Aun may be the funniest part of the show. There is also Princess Lashara who ends up liking Photon a bit too and becomes part of the rivalry. The weird thing about this harem is that they seem to want to be his mother more than his significant other. You have to watch the show to understand but he gets mothered more than anything.

Then you have the lineup for Team Evil (no that’s not their real name). Papacharino also known as Papacha is a wannabe emperor who is trying his hardest to kidnap Keyne but Photon stands in his way. He always tries to find ways to make a grand entrance. He has these creatures called Pochi. Well it’s one creature that seems to be cloned 28 times and they answer to the numbers on their heads. Pochi #1 becomes a pivotal character in the show as well. The Pochis are more like servants but they’re in charge of making the grand entrances for Papacha.

The show itself has the trademarks of shows from it’s time period. Some things aren’t up to par like the lettering in the opening and things like that. It has an opening and ending sequence that probably fit better in the 80s but it doesn’t take away from the show in any way. Some of the art switches to super deformed which a lot of shows were doing at that time but at least they didn’t go full super deformed parody like Dragon Half and some others.