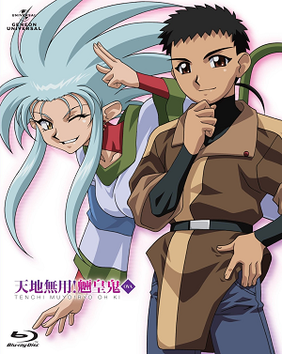 This is where it all started for the Tenchi series. Ryo-Ohki gives you the background for a lot of the future Tenchi series references. There are even other shows that take cues from Tenchi and vice versa. When it comes to harem shows in space, the Tenchi series is near the top.

Ryo-Ohki starts with a Tenchi who leads a quiet life helping his grandfather at the temple. His life would have remained quiet if he didn’t release a space pirate named Ryoko from her 700 year old prison. Ryoko ends up making Tenchi’s life a lot more interesting but she is only the beginning. An alien princess, another alien girl, a ditzy galaxy police agent and an insane scientist all join the party. Each of these females is after Tenchi for their own wants and desires and fight each other over him.

The madness doesn’t stop there, someone who resembles Tenchi’s mother drops in and his arranged fiancee Noike. Tenchi’s desire for a normal life is out the window at this point. These events lead to Tenchi wanting to know more about his past since some of these visitors know bits and pieces of it. What Tenchi doesn’t know is that his hopes of trying to figure out his family history would be interrupted by more visitors from space and having to actually fight a battle in space. What else is in store for Tenchi?

Unfortunately for Tenchi, this first series has some issues where a lot of it can be seen as filler. If they left out the middle part, the rest can stand on it’s own but that middle does give you some info and background on bonds of family and all that.There are also the voices which are…eh. In the dubbed version, it seemed like they just got anyone available without thinking about how it would sound finished. Maybe it was on purpose, who knows. But some of the characters make Lucille Ball sound melodic.

There is also a special episode, The Mihoshi Special. This is an episode narrated by Mihoshi when Ayeka questions her on her qualifications to be in the Galaxy Police. She casts the “housemates”  in the roles of the police and the villain. This episode also introduces Pretty Sammy which was another Tenchi spinoff. If you want to bypass this episode, I wouldn’t blame you. Mihoshi is my least favorite character in the whole series.

Ryo-Ohki is a solid show and this is where you start if you want to dive into the whole Tenchi series. The next 2 series were Tokyo and Universe. Universe kind of retells the story of the OVAs, while Tokyo is an alternate version. Then comes Tenchi Muyo! GXP and Ai Tenchi Muyo! which was a 20th anniversary celebration and was sponsored by the city of Takahashi, Okayama to help promote tourism. Plus you have the movies and related works like Tenchi Muyo! War on Geminar, Dual! Parallel Trouble Adventure and Photon too. So there is a lot of Tenchi out there to go around.