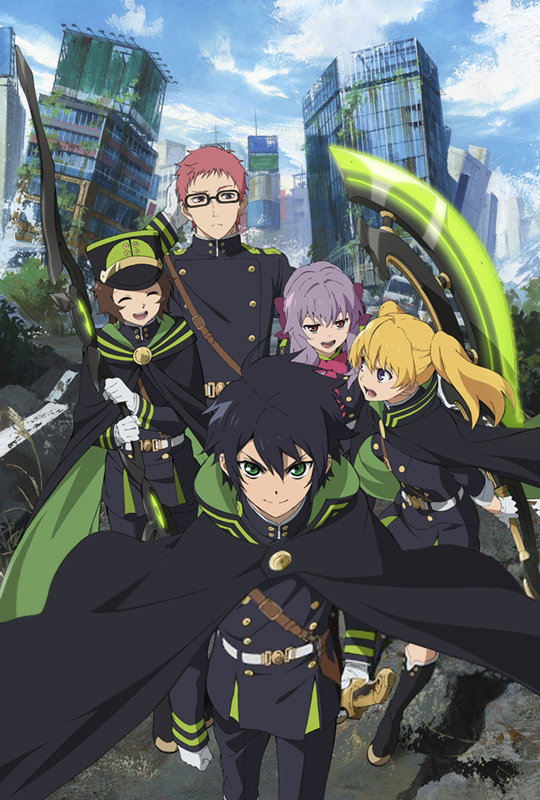 Seraph of the End is a show from the past spring season which actually brought us some very good shows. This was indeed one of them even though it took a while to build up to the action. Seraph really does start off slow. At first it looked like it was going to be sparkling vampires and BL all over the place. It does take a few episodes to see where they’re going in terms of direction of the show and that’s probably because they knew they had a second season coming.

The actual story is about a ravaged Earth that was destroyed in 2012 by a human made virus that killed anyone over the age of 13. This leads to the uprising of the vampires. They come from the depths of the Earth to take control of most of the planet and offer “protection” to survivors. That “protection” comes at a price, they have to give their blood to the vampires who need it to survive. Yuichiro and Mikaela plan to escape to the outside world but in their attempt, Mikaela is caught and sacrifices himself so Yuichiro can escape. Yuichiro has since vowed revenge on the vampires for killing his “family” and now has backup to help accomplish that goal.

The presentation of this show is probably amongst the best of any recent anime. Everything about the show is clean from the art to the music to the voices and dub work. Ian Sinclair must be getting rich, I think he’s in almost every dub in recent Funimation history. I need to get his voice in a game one day. It’s hard to find any faults with the show besides the pacing. For 12 episodes it’s paced poorly but if they ran the 24 episodes back to back then it would be fine but when you expect action and you’re at episode 6 and things haven’t progressed quickly, you think it’s going to be a bust. If you were one of those who thought that and stopped watching, go back and watch.

At the beginning, I didn’t know what to expect and almost gave up on the show but I’m glad I didn’t.  The show ended up being much better than I expected and I’m waiting for season 2. It did have a slow build but when the action started going, I was drawn in 100%.
[yasr_overall_rating]