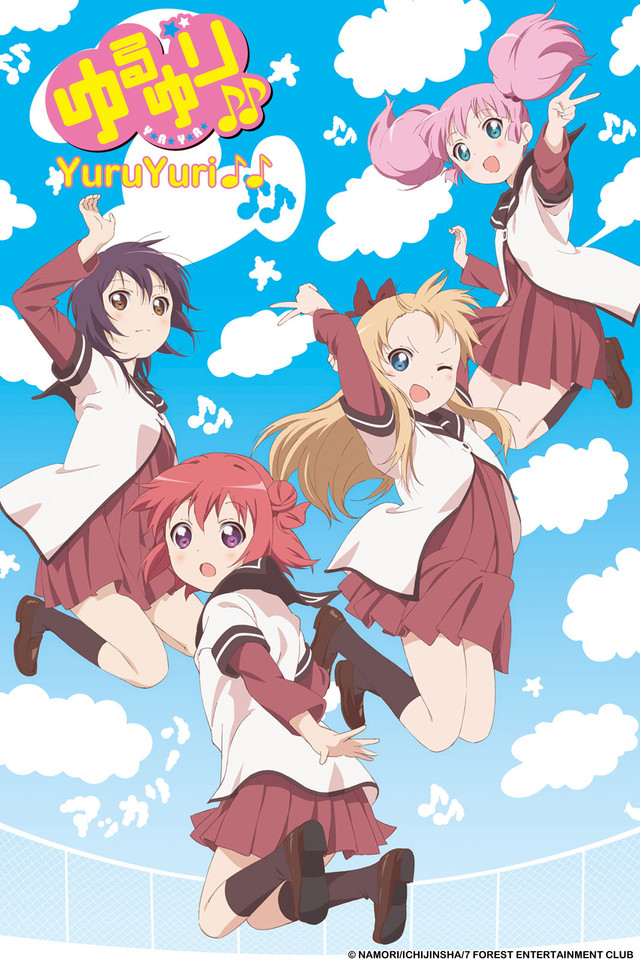 Yuru Yuri is about a group of middle school girls who have deep childhood bonds and they form an after school club. The club is just them having fun but this is where you start to see the yuri undertones. The 4 girls have friends in the student council and a few others who they interact with. Within the group there are some girls who like other girls but don’t know how to say it, some who know how to say it but get pushed away, and even some who fantasize about the other girls. But don’t expect this to go into hentai areas or anything like that. The show is very tame and it sticks mostly to the school activities, eating together, Comiket and things of that nature. When it comes to yuri action, it’s very innocent and nothing heavy. Not even sure I’d call it yuri.

The 4 main characters are Yui who is the voice of reason, Kyoko’s tamer and is not very feminine, so in some sequences seems to play the male role. Akari who seems to lack presence even though she is always there, even when she is introducing the show, she gets upstaged. Kyoko is a fun loving, lazy, otaku (kind of like Konata in Lucky Star),  she gets good grades on tests and also is a doujin artist with a character who looks like the last member of the group, Chinatsu. Chinatsu who was not part of the original group of friends but she befriends them and becomes part of the Amusement Club also, she’s cute and sweet but also has a dark side which is shown in her art.

Everything about the show is cutesy and moe’d up which is what you’d expect. Though moe isn’t my thing, this show does it in a way that it’s not so in your face that it makes you vomit. It seems like they took their time to carefully put this one together, I can’t find fault with anything in the show.

This is not a show that I would typically go for but I needed it for background on a character I’m putting into my manga and one in my graphic novel too (Yes they are different before some smartass comes and says they’re not). It’s a well put together show. I don’t know if I’d call it a recommendation but I am giving it a solid 4. This show is coming back for a 3rd season in the fall so now would be a perfect time to watch it if you haven’t already.