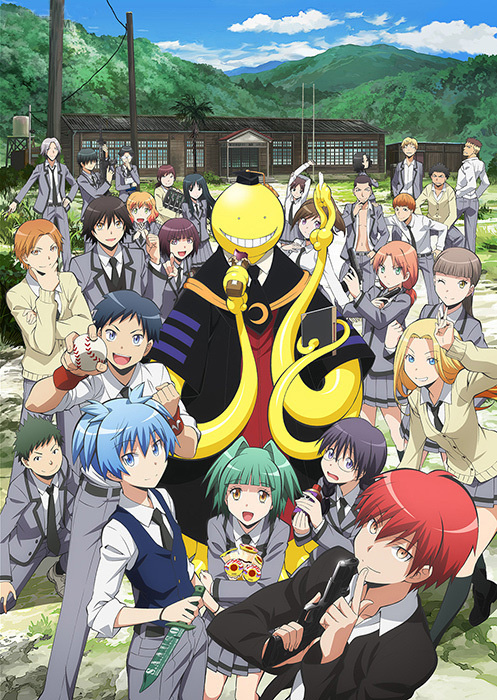 Assassination Classroom is a show I wanted to check out based on all the hype it was getting. The books were flying off the shelf, the OVA did well so why not see the show that is attached to all the phenomenon.

‘I have come from beyond to destroy the Earth unless the class of your worst students can kill me.’ Ok, those are not his exact words but that’s kind of the premise of the show. Koro-Sensei has destroyed a good percentage of the moon and landed on Earth with the intention of destroying it too. The government and the school are backing the plan for him to teach students while also training them to kill him, which he’s okay with. You would think he enjoys the thought of teaching his would be killers.

The stars of the show are Koro-Sensei, Bitch-Sensei, Nagisa and Karasuma. Koro-Sensei is the alien who is here to destroy the planet. He actually goes from ultra super powered killing machine to great teacher. The interaction between him and the students is something I never expected, teaching them and also teaching them to kill him. Didn’t expect him to become an otaku either but it happened. Bitch-Sensei is actually not her real name but because the sound of her last name and her attitude, the students call her Bitch-Sensei. She provides comic relief but she is actually one of the assassins sent to teach them how to kill him. When she’s on the screen, you’ll probably be laughing. Karasuma is the guy in charge of the Class E program. He’s a former military officer that’s trained to kill and he also helps them in their mission to kill Koro-Sensei. Then you have Nagisa who is a student who has very little self-worth at the beginning but he grows throughout the show. But if someone told you that Nagisa was a girl you’d probably believe them.The side characters are a collection of weirdos, cool guys, odd teachers, etc. Some do have a bigger role than others, like Karma but they’re still more supporting cast than major roles. Even Bitch-Sensei is kind of a support character after a while.

It’s kind of weird that they went with a light pop type music feel for the show opening and closing. I would have went with “It’s the End of the World As We Know It”. Ok maybe not for an anime but you get the point. You see that a lot in anime though, where songs don’t seem to match the mood like the song at the end of Deadman Wonderland. I didn’t know what to expect from the dub but it came out well. I just wish Funimation didn’t have all those gaps in the broadcast dub schedule. I watched dubbed and subbed and Sonny Strait was a great choice for Koro-Sensei. I didn’t think so at first but the guy does sound like a teacher so he fit the role and did it well.

This show will always be at the top of my recommendation list. I am not going to say the show is perfect but it’s damned close. Kind of wish they didn’t announce the 2nd season because that’s when you knew there wasn’t going to be a conclusion or something was going to happen besides the possible destruction of the Earth. Can’t really teach a class if the Earth is destroyed. But that just means another 12-24 more episodes of one of the best shows of the past winter season.
[yasr_overall_rating]