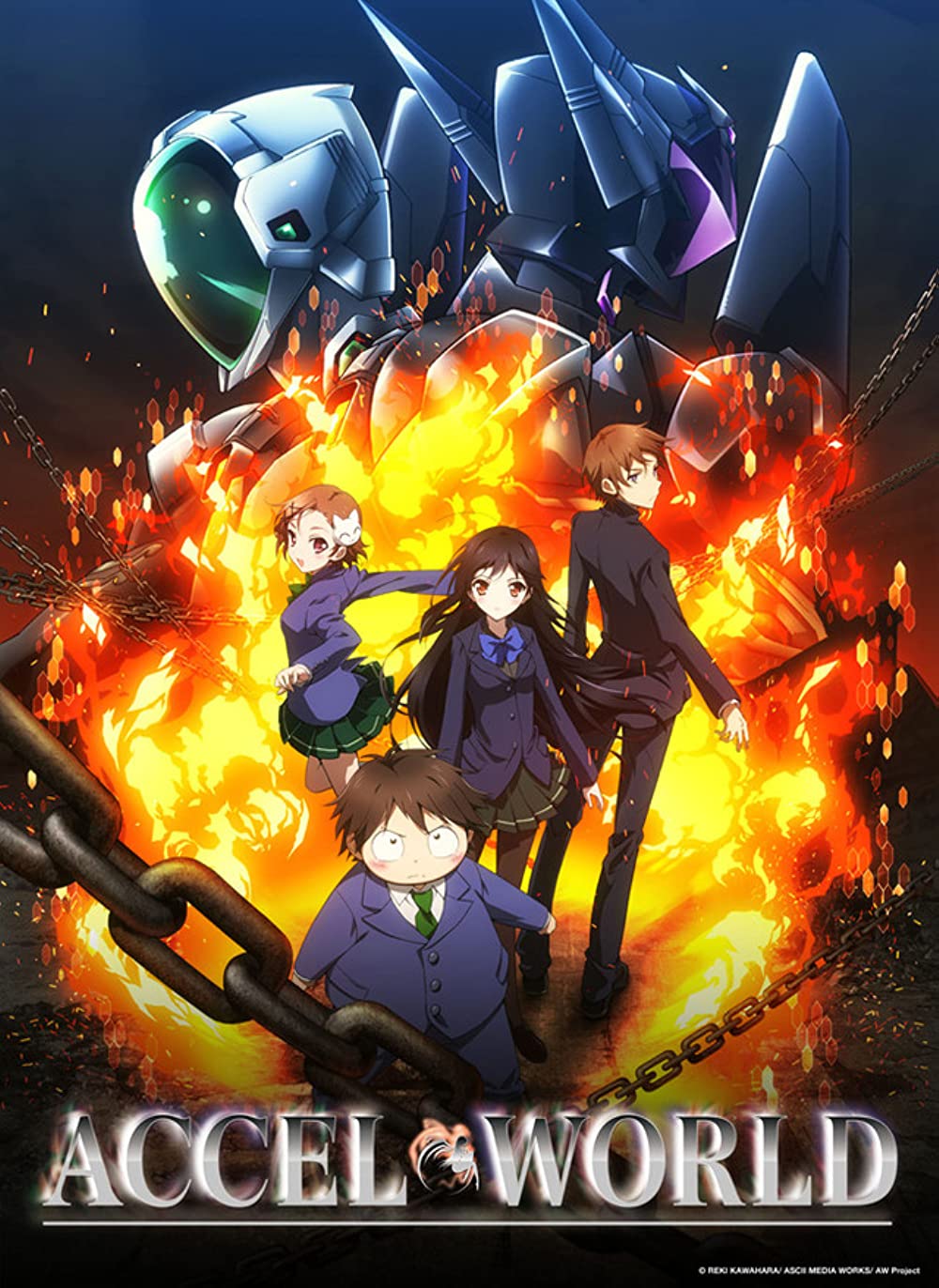 Yes Accel World is short for Acceleration World but that would sound kind of weird. I remembered watching it but didn’t have enough to make a post on it. Then @icebergluffy posted this debate question on Twitter and someone mentioned that people didn’t check for Accel World because the overweight main character. Though his reason and mine differ on that character, it got me to watch it again.

Accel World is about another “world”. It’s like a game within a game when you’re watching the show. They already have avatars and such on a school network and then Haru is introduced to Brain Burst by a girl who’s been watching him and wants to take him under her wing. In Brain Burst your character is based on your fears, desires and self loathing (sounds weird right?) Brain Burst is also where the accelerated world takes place. In the accelerated world, time moves at a fast pace but on the outside it might only be a few minutes. The skills from there can be used in realtime though, where some people use it to gain an advantage at school or even to save someone’s life. It’s hard to explain the whole concept without blowing up the plot. As you know, I don’t blow up plots for people because that would take the fun out of watching the show. But there is love, violence, mechs and more, so how can you go wrong.

The show revolves around Haru and his lack of confidence, self esteem and everything else associated with that, even in the accelerated world. He seems like a good kid but has inner demons. All the characters seem to have some type of inner demons eating away at them. Snow Black who is his “parent” in Brain Burst has demons of her own too and can come off as a bitch at times but she does have a heart. She is one of the main catalysts in this show. You could probably say she is more important to the plot than Haru. Chiyu and Taku play a role too as Haru’s friends but they’re more B characters than A, even though they are there throughout the show. There is also Niko the 5th grader who is Haru’s height and maybe slightly taller. Of course they had to add in the loli somewhere. I really hope people get over their lolicon fetish.

My issue with Haru is the fact that he is shaped like an egg and shorter than a 5th grader. Who’s idea was that? Then his avatar is a pig. See the pic I have on this post? It was hard to find it because most of the art features Snow Black which is fine I guess. A lot of shows take the supposed prettiest character and puts them on covers, including manga and novels. Then I found some that were her and the pig avatar. Now if I saw that as the show card I would turn away like I did with Umaru (that show is just not good). Anime and manga have a hard time now since things have moved from DVD sales and all the extras so they have to do something and having him on the cover would hurt sales more. Things weren’t that bad though, look at the poll on Crunchyroll of shows that deserve a sequel, Accel World is on there. http://www.crunchyroll.com/anime-news/2015/09/06/sequel-worthy-anime-poll-follow-up-men-only-voting-results

Overall, I think it’s a very good show and so do many others. It left off at a point where it could be an actual ending so they don’t have people kicking down the door like Sekirei and others that didn’t end properly. I can definitely say it’s one of the better shows and if they make another season, I’ll be checking in for sure. There’s also 2 OVAs which are just added bonuses and 8 mini episodes included with the Blu-ray/DVD release which has everyone as a chibi but Haru is his pig avatar and they start off each one with him and Snow Black doing pig puns. They’re kind of funny since it shows Snow Black a little more vulnerable than in the main show.

By the way, if you’re an anime fan and like talking anime with others then you should follow that cat @icebergluffy. He does the debate thing and other random questions. So you can get recommendations and all that from others who like anime. Plus he’s not one of those “I think I’m an anime god” type personalities so always cool to deal with.