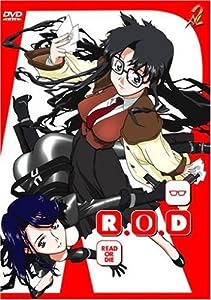 Read or Die may sound like an after school special or something but it’s definitely not. It’s actually a 3 epiode OVA, spy story. Yomiko Readman is the protagonist of this story. A bookish, high school teacher who has a very childlike nature about her. She’s attached to a book that seems to be the target of many other people.

Yomiko, known as “The Paper”, has some supernatural power to control paper, hence the name. A few others in the show have power too like Ms. Deep, who happens to be her partner. They are protecting Yomiko’s book from historical figures who happen to come from books and another more sinister force.

The show has a cyberpunk style setting and for what it is, they do a pretty good job. Yomiko is just an awkward main character. You can have someone bookish and an aficionado but also have a better personality but I know a few people like her so it’s not that it’s an unreal personality, it’s just not lead character personality.

Read or Die is an okay show. I can’t say much more than that about it. It’s a run of the mill spy story set in a fantasy setting. This is my first time seeing the show and soon I will follow up with the series that takes place 5 years after the events of the OVA.