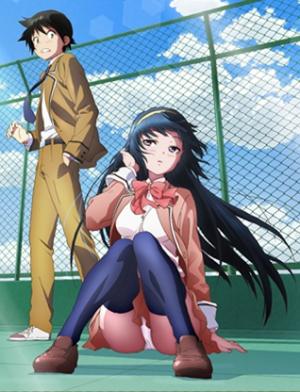 Nozo x Kimi was also part of Anisun like Ane Log and Alice in Borderland. The show starts off with Suga finding himself in the girls locker room, unable to leave or escape,  he wasn’t there on purpose, just a coincidence that he ended up there. With no path of escape, he has to jump into a locker. Nozomi Komine, who seems to be the shyest girl in class, finds him but she covers for him.

Suga doesn’t realize this is only the beginning. Nozomi happens to to live across from Suga on the same floor but different buildings. She gets him to agree that that have to show each other their bodies when she sends him a text. It’s usually in the morning when she does this. If Suga doesn’t do this or does something she doesn’t like then she will tell his secret. So the private peep shows continue and Nozomi starts getting excitement out of it so she starts bringing others into her web with Suga’s help and the adventure begins.

This show is another 3 episode OVA and it’s actually a spinoff of Nozoki Ana. Don’t worry, it’s not the hentai-ish show that Nozoki is. I can easily see this being a 12 episode show. If given enough time, they could expand the story that they have in the 3 episodes. I like where they were going with this but so far there has been no news of a full adaptation.
[yasr_overall_rating]