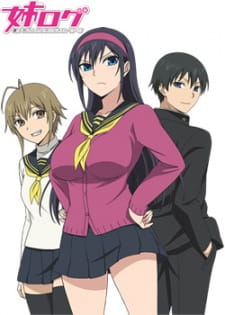 Ane Log was part of Shonen Sunday’s ambitious project “Anisun”, where they announced 7 adaptations at the same time. Nozo x Kimi and Alice in Borderland came from the same project.

This show is about MoyakoKonoe and her little brother Akira. Moyako and Akira seem to have a very loving relationship but there’ s problem. Something Akira said when they were younger has Moyako thinking all kinds of weird thoughts. He said something that was probably just an innocent statement from a kid. Akira said when they get older, he was going to marry her.

Now that they’re teenagers, Moyako has convinced herself that she has to rehabilitate Akira as if something is wrong with him. Everything that happens between them or if she even has the thought that something might happen, turns into a perverted thought in her head. The most innocent situation is turned into some perversion. For example, they’re at the beach and while Akira is out in the water with others, she starts thinking that he’s going to drown himself just so she could give him CPR. She ends up being a bigger danger by rushing out to him at mach speed and almost drowning him herself.

This is a 3 episode OVA, so it’s only an hour of your time. Don’t get me wrong, it’s a funny show but in OVAs they usually don’t have enough time to flesh it out and this is no exception. It feels very condensed. I think if it got broken down into smaller parts like Oneechan ga Kita then it might be better because it feels like that kind of show where you should have 5-10 minute segments. Given a little air, I think this show would be a good one.