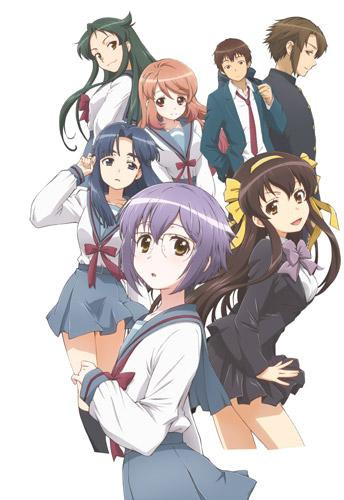 I was wondering what I could expect from this show. Nagato in The Melancholy of Haruhi Suzumiya and The Disappearance of Haruhi Suzumiya was not a character I could see a show built around. This is the same with many dandere and kuudere type personalities, they don’t really make good show leads unless the supporting character(s) takes a big role like in Witch Craft Works.

The Disappearance of Nagato Yuki-chan is not like Haruhi disappearing. As a matter of fact, Haruhi plays a big role here too. You can’t calm down her overwhelming personality. Some of the roles are changed but the cast is the same. Nagato this time around is a clumsy, teenage girl in love with Kyon and it seems like Kyon feels the same way but like awkward teens, they don’t know how to interact with each other. Ryoko is now a doting mother figure to Nagato and the group whenever they’re together. By slightly changing roles, the show still has the feel of the original but felt completely new at the same time. Don’t worry, Mikuru is still the same sugary sweet Mikuru.

Just like in Melancholy, there are adventures, trips, talks of espers, aliens, time travel and all the zaniness that made Melancholy the show that it is. Things like Kyon’s feelings towards Mikuru are still there and Haruhi having the club do things together but this time Nagato has the reluctant driver’s seat and Haruhi is a side character. I say reluctant because she has to be coaxed into things due to her shyness but that’s part of the charm of this new entry into the Haruhi universe.

Production wise, the show is a bit more like other shows that are out there now. It’s not produced by Kyoto Animation like the original shows and it would probably be hard to produce the same results. The art definitely has a different, more modernized style but it fits. The music is as good as something you’d expect from a Haruhi show. The dance sequence is still intact for the opening. It just wouldn’t be a Haruhi universe show without it.

As usual, the Haruhi universe produces another very good show. It does not stand up to The Melancholy of Haruhi Suzumiya but this is still on of the strongest shows in recent years. I can say it’s a show I’d recommend if you just want a good show.
[yasr_overall_rating]