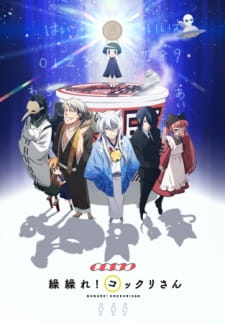 The story of Gugure! Kokkuri-san revolves around a little girl who summons Kokkuri-san, a low rank ghost in Japanese folkfore. When he arrives, he meets an 8 year old who thinks she’s a doll. She shows no emotion and makes statements like she’s an actual doll, like when she’s hungry, she says her batteries are low. Kokkuri-san who was just there to haunt her, becomes worried about her and decides to “haunt” her in order to protect her. For one reason or another, she seems to attract other spirits and weirdos too. A dog who wants to be loved, a drunken tanuki,  woman who think she’s a cat and even an alien.

Not one of the characters in this show was remarkable in any way. You may end up remembering them because how bad they are. You won’t forget Kohina because she’s different from almost any other character out there but at the same time, she’s not very engaging either. I can see a few people liking her but the other characters are just not good.

Well I can say the presentation on the show is good. The opening sequence is kind of catchy with the disco type scene and music but beyond that, there isn’t much I can add about the show. Decent production value for an average show.

The show is just not very good. I don’t even want to waste words on it. I hate being hard on a show when I know how hard it is to get a show done but this one…