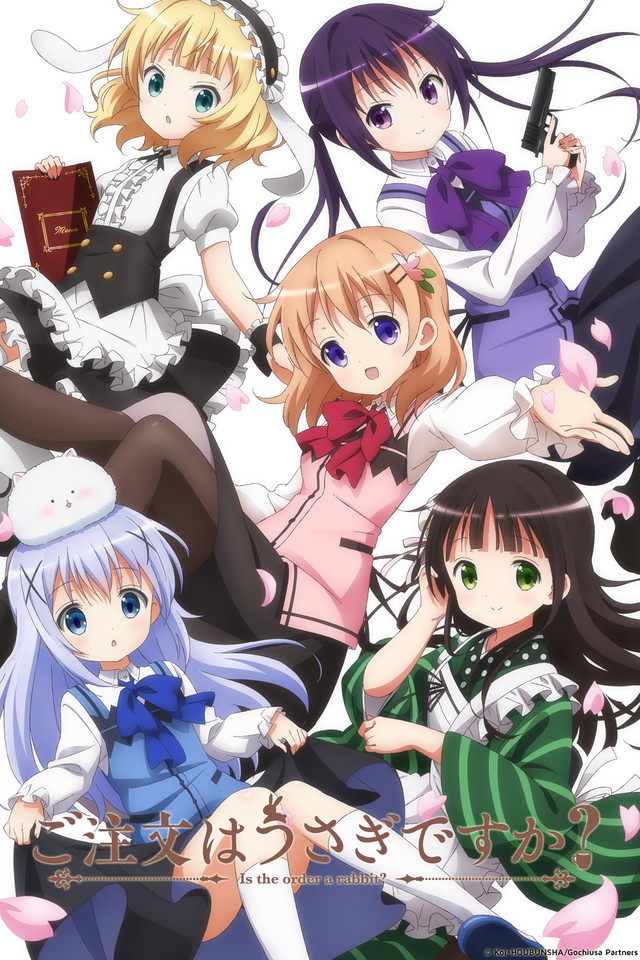 This show ended up on my watch list sometime last year because the ridiculous name. It’s part of the moe show invasion.

The story revolves around Cocoa Hoto (Yes, that would be hot chocolate). She moves into a new town to attend school. In the new town, she doesn’t know anyone but ends up living with Chino at her family’s cafe named Rabbit House. Cocoa becomes a waitress there to earn her keep.

Rabbit House is a cafe that doesn’t get a lot of business so during the show they’re trying to get more business by passing out flyers and other things to get attention. A lot of the show ends up being cute girls doing cute things and making friends like most moe shows. This one is no different.

Production wise, this show is slick and you can’t really find many faults with it. The art, music and everything else is smooth. The background art looks even better than some fantasy shows, they give Seven Deadly Sins and Is It Wrong to Pick Up Girls in a Dungeon, a run for their money with the town setting. There is no real plot in the show so not much to look for there.

I don’t know what to say about this show. It’s just girls being cute and doing cute things. It’s moe. Nothing technically wrong with the show and it fits all the moe characteristics. When I rank a moe show I don’t rank it on plot or anything like that, just overall production value because these aren’t my type of show and I don’t feel right grading a show like that. If you like moe then you’ll like this.

Is This Order a Rabbit? has actually just started it’s second season so if you’re a fan of the show there’s new episodes waiting for you.
[yasr_overall_rating]