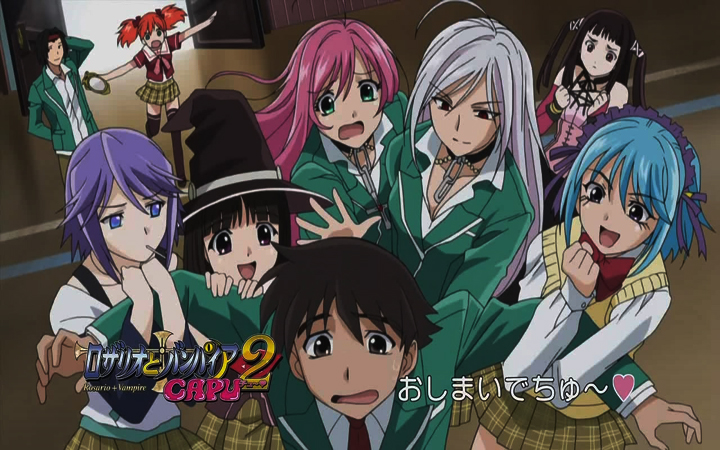 I meant to go back and watch this earlier but for some reason I kept bypassing it. Rosario + Vampire is one of the harem animes that was done very well for a short season, well 2 short seasons. The summer 2015 season had Actually I Am which has a similar concept but they did go in different directions.

The first season sees Tsukune get admitted to a monster school by his parents. Of course Tsukene is unaware of the situation and the school. On his first day he gets ran down by a vampire girl on a bike, this girl is Moka, his classmate and the female protagonist. Upon getting to homeroom, he learns that he’s in a school for monsters where humans can’t get past the barrier but somehow he does with no issues. So now Tsukene has to protect the fact that he’s human from Moka and all the others while he has girls who are jealous of Moka trying to get his attention. I bet you’d want to trade places with him.

The second season adds more monsters including Moka’s sister. There is a lot of serious 4th wall breaking and singing in this season. You have actual show stopping songs where they’re basically on stage in front of everyone. Well, one number is actually on a stage but they usually take place in the classroom. This 2nd season was less plot and a lot more haremy stuff going on this time with more people involved then just the 4 girls from the 1st season. This makes for a lot of interesting situations. They do add in a bit of plot too so it’s not all harem, all the time.

They seem to flip flop the opening and ending sequence in both seasons and there’s more than one. The most interesting of them all is probably the fully animated disco song from the 2nd season. One thing that I found annoying was the narration. There is a narrator and also a bat character who does some narrating too. Both were annoying after the first few episodes. The art is standard fare art for a harem show, hair over eye included. The music, even if you don’t like the music, at least they were creative with it.

The show is listed as ecchi but it really isn’t that ecchi. It’s like a typical ecchi anime with fighting, you get a few shots early then it calms down. This one has some random moments and a ton of panty shots because no one has a skirt long enough to cover. Maybe a breast grab or two but nothing that’s super ecchi or hentai-ish. The 2nd season did add a few more moments but nothing really over the top.

I did find myself enjoying the show more than I thought I would both times I watched it. The first time it was the newness but this time it was the fact that it’s better than some of the newer harem shows. Actually I Am is only similar in the fact that there is more than one “monster” and a vampure girl as the lead. After that, they go in very different directions.