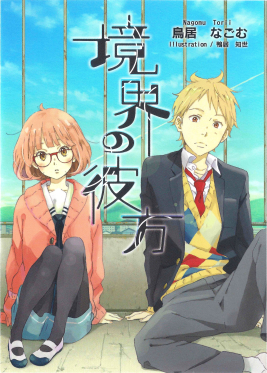 Beyond the Boundary is a show I saw subbed but waited for the dub before making this post. For some reason I felt there was a need to do that with this one and I was right. I don’t get into that ridiculous dub vs sub crap. It’s not as if those people who bitch and moan are fluent in Japanese so it’s kind of a pointless argument that they make. I’ll save the rest of that rant for another post. On with the show.

The story starts from where most shows would probably end, with a girl on top of a school, ready to commit suicide. 700-105 dumps That girl is Mirai, an innocent looking girl who has her reasons for doing what she was about to do. In steps Akihito to save the day and the thanks he gets for saving her is a stab through the chest. She stabbed him because Akihito is what is known as a youmu, half youmu to be exact, and Mirai is part of a spirit hunting clan that protects humans from being affected by youmu. This meeting is just the start of their lives becoming intertwined.

So you’re probably wondering what a youmu is right? Well, they’re supernatural creatures that can only be seen by those with an affinity to see them, known as Spirit World Warriors. They are a human manifestation of negative emotions. They come in many different forms from minute to human to giant monster. Akihito is the rare one because his mother is a human and his father is a youmu. Most youmu are calm but when one gets out of line, a Spirit World Warrior has to eliminate them. This is a source of income for the Warriors. You can find out the rest by watching the show.

The two main protagonists are Akihito and Mirai. Akihito is basically a typical teenager with a glasses fetish which shows up a lot in the show. As a matter of fact, he calls Mirai a ‘bespeckled beauty’. Akihito ends up being a comedic foil for Mitsuki and the others. Don’t let that fool you though, he is still the main catalyst of the show. Then there’s Mirai who is so ridiculously moe cute, she might even have Mikuru beat in cuteness. She is even dressed up in sexy outfits by one of the other members of the group. She’s more of a talkative, not seen as ‘hot’, version of Mikuru.

As I sit here typing this, I can see a lot of the Haruhi dynamic between the characters. Maybe that’s why their interactions are so funny. It’s not a comedy but I found myself laughing at them almost every episode. I wouldn’t say there is a Haruhi in this group but Mitsuki is your resident tsundere who pushes Akihito around. Akihito would be your Kyon of the group. 810-440 dumps But don’t look at them as Haruhi and Kyon as a ‘couple’. Hiroomi would definitely be Itzumi with the seemingly homoerotic actions. Mirai is kind of a mix of Nagato and Mikuru, she has her bookish, shy Nagato side but is also ultra cute like Mikuru.

Beyond the Boundary is a beautiful show. The show was filmed in a way that makes it look like something you’d go see in the theatre. There is a 2 movie project that came out earlier this year and an OVA which is a prequel to the show, also done in the same style with the beautiful artistry. The OVA and the movies perfectly bookend the show. It’s almost a shame that they complete the story and there may be no sequels. I don’t think I can come up with enough superlatives to describe this show. From the very second that the show starts, you can see the work put into it. The show is a work of art that was carefully crafted.

This show goes down as one of my favorites. Watching in Japanese I would have given it a 4 but in English it gets a full 5 star recommendation from me. The English just adds more to the humor side of the show. In Japanese they are a lot more “stiff” for lack of a better word. This show has a lot of moments where you’ll end up laughing even if the show isn’t a comedy. Subbed or dubbed, this show is definitely a good one and one of my favorites. You may disagree with my thoughts and that’s fine. It’s okay if you’re wrong. Seriously, I just really liked this one.