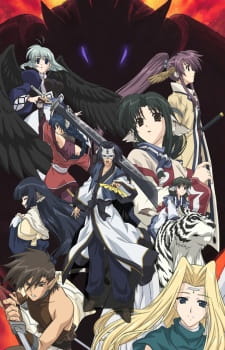 I went back to watch Utawarerumono because the new season is out and I like to have background on what I’m watching. It looks like the 2 stories will be similar but not the same. It looks like Utawarerumono ended where it was and the new season does not connect to it unless there will be some twist at the end or something. So far the second season has no mention of anything from the first but it’s only 3 episodes in.

A masked man was found in a cave, battling a demon, by Aruruu He’s suffering from amnesia and she saves him.  takes him to her home to treat him until he’s well again. Since he doesn’t remember anything, he names him Hakuoro after her father and soon he becomes part of their family. It’s her, her sister Eluru and their grandmother Tusukuru. As things progress, Hakuoro finds that the village is being oppressed and he ends up leading a rebellion against the emperor of the country. Hakuoro learns that peace is not easy to maintain and he must lead the villagers into battle to protect Tusukuru and it’s inhabitants. There are many battles along the way to bring and keep peace in the country.

For a fantasy show, the world setting is beautifully done. In terms of music and sound, everything fits together well. The plot is very simple and easy to follow though there are some twists and turns. This show is solid all the way around even with the setting change where it goes from fantasy to sci-fi. The change of settings is almost as seamless as the rest of the show’s story. The battle scenes in this show are pretty good for short scenes and get the point across without being overdone.

While I’m an action guy, the show ends up being predictable which makes it lose steam. Then all of a sudden it changes from a fantasy setting to a sci-fi setting. It’s not that it doesn’t fit or work for the show but it is unexpected and somewhat awkward. Utawarerumono is a good show but not something that stands out really. If you’re a person who likes fantasy shows then you will probably like this one.