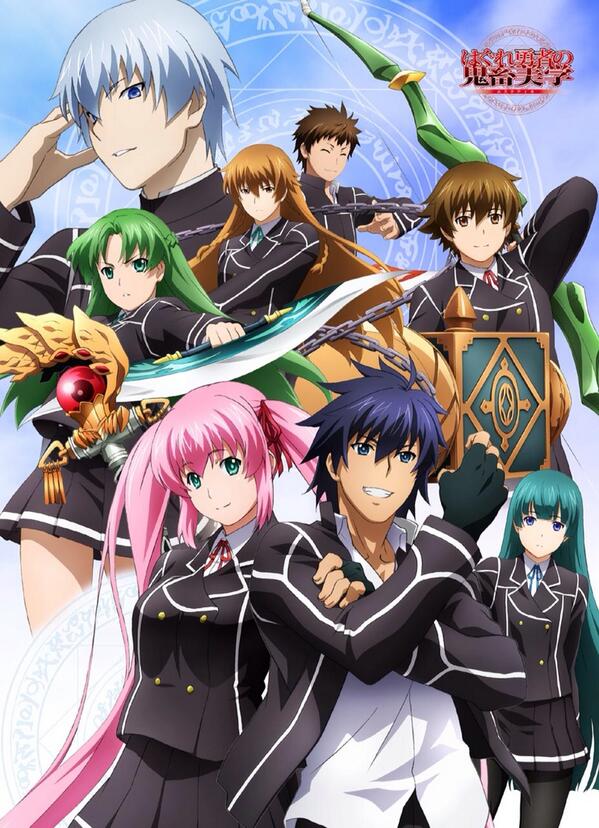 Usually the story would go like this: Hero defeats bad guy, good wins and evil goes home. Hero expects to go home and be treated like a conqueror. Happily ever after and all that. Well sometimes that isn’t the case as Akatsuki Ousawa is about to find out.

Aesthetic of a Rogue Hero takes place in a fantasy setting, a world where young men and women find themselves spirited away to another world. A world of swords and magic known as Alayzard. Those who survive and are able to make it back to their world are given magical abilities. An international training organization known as Babel protects the survivors and trains them to use their abilities properly so they can protect themselves and the world if needed. Akatsuki is one of those who made it back from the other world but he has cargo with him, a girl named Myuu who is the daughter of the Last Dark Lord, whom he defeated in battle and made the promise that he would take care of his daughter. This is only the beginning of that quest.

The cast of characters follows the usual harem tropes for the most part but there is one big difference. Akatsuki, a cocky, brash, bold, strong lead character which differs from most other harem anime. When he finds himself in ecchi situations, it’s usually because of something that he does and not just falling and tripping into a handful of breasts. Seriously, have you ever fallen and ended up with your hand on someone’s breast by accident? Myuu is a demon lord kid, around the time of this show were several demon lord kids and devils (ex: Devil is a Part Timer, I Couldn’t Become a Hero). She’s your usual pink haired character, sweet, soft, and caring. You have a short haired uber-lesbian, a loli, a tsundere (who’s hair actually isn’t black), some scheming kid so most of the usual tropes for a fantasy anime with harem parts.

The show starts off with music that sets the mood of the show, well the action parts anyway. There’s decent, detailed art to make strong visuals. There are some ecchi parts which are…ecchi but also some that are awkward. Though I guess it depends on your definition of ecchi because some think EVERYTHING is ecchi. The OVAs are uber-ecchi. Like ALL ecchi. The first one is Akatsuki vs the women of Queen’s Blade Rebellion then the rest are the cast of the show in ecchi situations. Overall, this show is strong on the presentation side.

This show isn’t your typical ecchi harem show. Most of them have a weak protagonist or one who doesn’t have a clue what’s going on. This one has a cocky, brash, strong lead and he does keep it ‘interesting’. In terms of these type of shows, I put this one ahead of the others for not being the traditional weak guy who doesn’t know what’s going on plus it does have a lot of action.