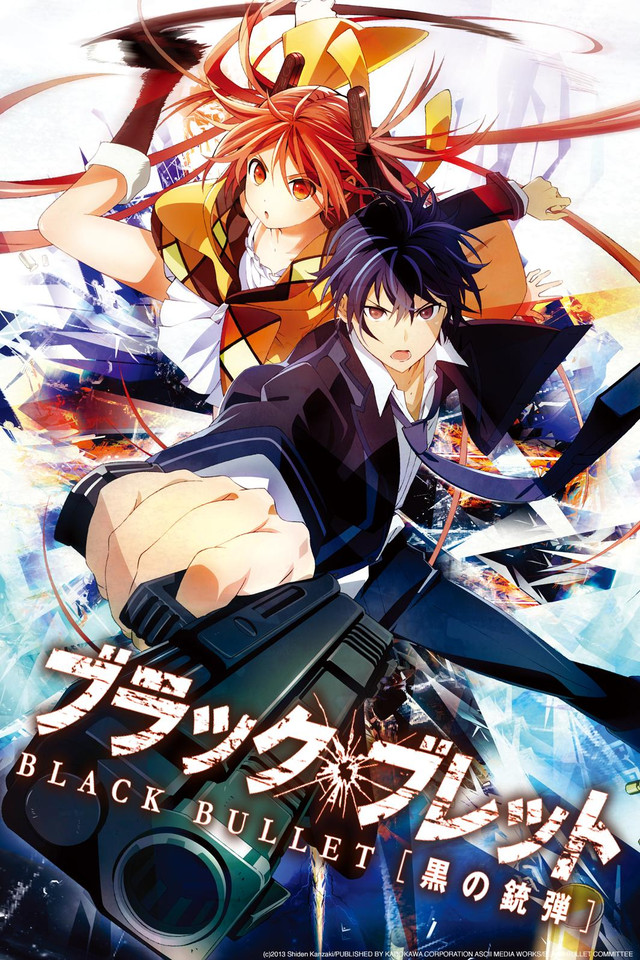 Have to admit that Black Bullet is one I picked for the name. I figured that with a name like that, someone’s getting shot. Though I thought more like a survival thing where you only have one shot or it’s some special bullet like how silver bullets kill werewolves. It wasn’t any of those but it was still an action show and I’m a fan of action so at least that part worked out.

It’s the year 2021 and humanity has been ravaged by the Gastrea epidemic, a parasitic virus which takes over the human host and turns them into a monster. People have been forced to live within the barrier of Monolith walls which are created from Varanium, a metal that is able to subdue Gastrea. Soon after the epidemic there are children who are born with the virus and they obtain supernatural powers because of it. Because of the virus, these children are all female and are known as “Cursed Children”.

Groups known as Civil Securities are formed to fight the Gastrea. They are formed by a Promoter, a skilled fighter and an Initiator, a Cursed Child. 10 years after the epidemic starts, Rentaro Satomi,a high school student and Promoter, joined by Enju Aihara his Initiator and Kisara Tendo, a childhood friend form the Tendo Civil Security Agency. Together, Rentaro and Enju go on missions to prevent the destruction of Tokyo and the rest of the world.

The show looks very good, sound is great, music works well too but there are some issues. Well I call them issues, some people actually love it. Lolicon issues. Enju is such a sweet kid but they gave her like 2 lines that were just way too much, they weren’t even borderline, just way over the top. Then the fact that all the initiators are little girls. It’s loli bait or as some people call it, ‘otaku bait’. Whichever it is, I’m not a fan of the loli stuff at all. If you want to have a little kid then let them be a cute little kid and not pervert ecstasy.

Black Bullet is an action show first but there are other elements which make it a more enjoyable watch. If you’re worried about bad language there are a few f bombs and some other words, probably about 10. There is even some emotional content in the show too, one that is pretty sad even if you’re emotionless. Except for the issue I mentioned above, I like Black Bullet and if you like action then it provides that and more. It doesn’t break the mold or anything for the genre but it is one of the better ones.

If you’re looking for the dubbed version, it’s out by the time you read this and it’s done very well. Screw stupid dub vs sub debates that are meaningless. This one is done well like most dubs are. I won’t say all because I’ve seen some horrible ones.