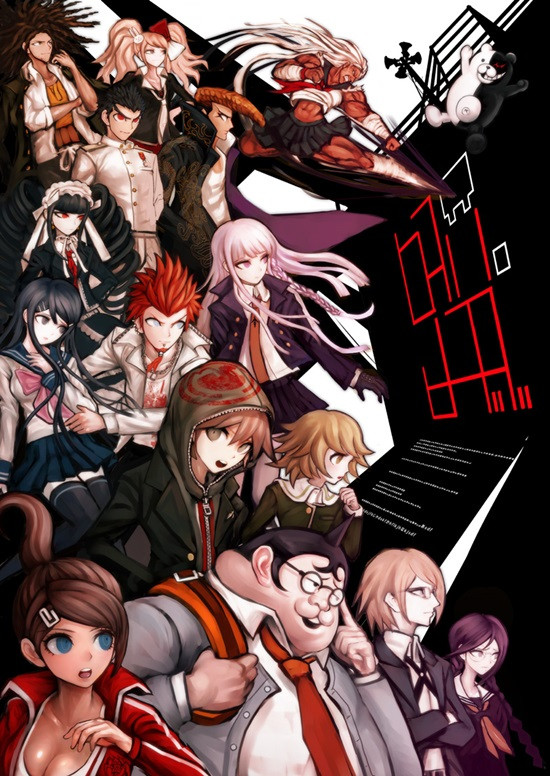 Danganronpa, a name that a lot of people know from visual novels. I have never touched visual novels so I wasn’t familiar with it but 16 people locked in a classroom/school who have to kill each other? What’s not to like, right?

16 students get locked in a school by an anonymous figure with one goal. Survive. The students are told that only one of them gets to survive and everyone else dies. These students aren’t killers and don’t want to kill each other so it makes for a philosophical debate. To kill or not to kill.

There is an odd cast of characters. It seems as though you can tell who the main characters will be by how “normal” they are. You’re enough info on each character so they aren’t faceless blobs. They all get some decent facetime but you have a guy who is shaped like a manatee and has a woodchuck face, a female who is build like Brock Lesnar, a guy who looks like a biker gang punk from the 50s and a few other weirdos. The true protagonist is Makoto Naegi, he seems to be the one most intent on keeping the group together or at least the one who voices it the most. And who can forget Monobear/Monokuma, my least favorite character. Some people probably like Monobear/Monokuma but I can’t stand him. He’s seen as the villain but there’s more to his story.

The show looks like a mixture of CGI and some drawn but mostly CGI, the drawn parts may be CGI too but the look is there. One thing that I noticed was the songs for the opening sequence were different every time. You even get a Monobear song. Production value on this one is pretty high. I will give them credit on the dub, I love the dub of this show, except the vices of the psychos which are kind of annoying.

I like the show but of course since it’s only 13 episodes, they have to rush it. It didn’t have strong backstories or anything like that so you don’t feel too rushed but you might be sitting there waiting for more. It has a few things that could have been better but it’s a pretty good show. A show that it will most likely get compared to is Assassination Classroom but the shows are very very different. There was something at the very end which might make someone think there is more coming. I won’t say what it was but watch to the end and you’ll see it.