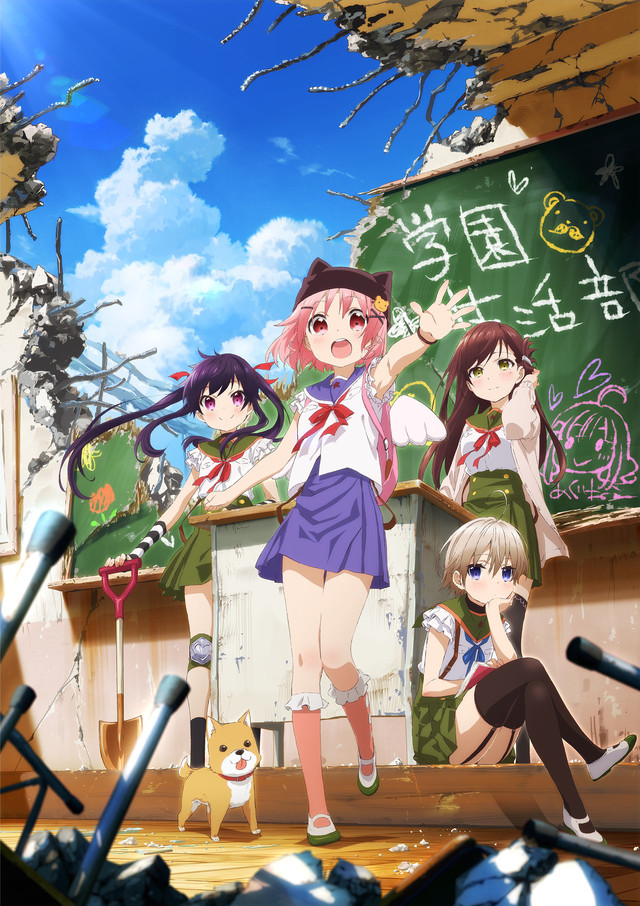 I was passing on this show until someone said it had a Higurashi vibe and Higurashi is a show that I liked. I was planning to watch most of the summer season anyway since I had a lot of free time but this might have gotten pushed back if someone didn’t say that.

Yuki Takeya is a bright cheery girl who loves school in every way imaginable. Yuki is part of the School Living Club at her high school with Kurumi, Yuri, Miki and a teacher who is affectionately known as Megu-nee though she repeatedly asks them not to call her that since she is their their and they should be calling her sensei. Yuki seeks out fun things to do at school while they’re ‘living’ there. The other girls work hard to keep her safe because the reality of it all is that they’re seemingly the sole survivors of a zombie outbreak.

Production on the show is tight but most moe shows are, look at Gourmet Girl Graffiti and Is This Order a Rabbit?. The music is way too cutesy for the premise but I guess it works for the show. You can’t find many faults in the art at all besides all the cutesy-ness. They did do a different take on the zombies at school thing, it’s nothing like High School of the Dead or any of the others.

Moe girls and zombies. The premise works well but the show is just too cutesy. If you’ve seen Corpse Party then you’ve seen what moe looks and gore can really be. This has some gore and some violence but not enough for the situation they face. It’s solid for what it is but don’t go breaking your neck just to see it. Don’t worry, the zombies aren’t cute too.