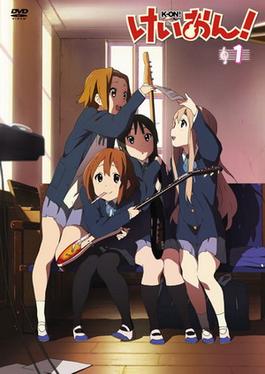 K-On! is a show that has been on my list for a while but not by choice. It has been talked about a lot and I had to see why all the fuss. Whether positive or negative, it gets talked about a lot. Whether it’s because a lot of people think it’s a show about nothing or big eyebrows (Mugi does have some big ones). I’m not a fan of moe shows but if a show is quality then I’ll watch. This one was more for curiosity plus I’m a big fan of Kyoto’s projects. I even had someone ask me how I see my manga I’m writing and Kyoto was the answer. I’ll talk a little about Kyoto at a later date.

K-On! is about a group of girls who try to restart the light music club at their new school. The main focus is Yui, a carefree girl who signs up for club, not knowing what they do or how to play an instrument. The girls of the club are facing disbandment so they convince Yui to stay and the adventure begins. On top of going to school and homework, Yui has to learn to play an instrument ahead of the school festival.

The characters of the show have distinct personalities and are bright and cheery. Yui is a carefree airhead but very sweet and sisterly. Mugi is “the rich girl” but not one of the ill mannered, knows nothing about the world type. She is a little naive but not like you see most rich girl in anime. Mugi is also ‘eyebrow girl’, when someone says ‘K-On eyebrows’, that’s who they’re referring to, even though she isn’t the first anime character with some massive brows. Ritsu is the “leader” of this odd little group, I guess you’d call her a moe tsundere, not quite an angry personality but definitely harder than the others. Mio is a shy and somewhat stern personality and a bi tsunderey too but again not to the extreme. Little Azusa is seen in a lot of gifs, just type in K-On catgirl. She may even come up if you just type catgirl. They put cat ears on her and treat her like a cat at times so that’s the genesis of that. Even in moe shows there are unlikable characters but all the characters here are likable for the most part, even the slacker teacher who is the club advisor.

The production value is high but not high at the same time. You can see break downs in art at times but everything is consistent from beginning to end for the most part. In usual Kyoto style, the intro and outro don’t lack style. Kyoto usually has dancing involved in their intros and/or outros but since this is about a band, they have them playing instruments for the intro and dressed up and playing a ‘show’ to end the show. While the show seems like it’s about nothing, it has the one basic plotline with lots of little things in between. When you look at this show, you will see a lot of Haruhi influences but that seems to come across in all of Kyoto’s shows in a way.

Is the show moe covered with molasses and confectioner’s sugar on top? Hell yes. But the show is funny, always moving and one of the better slice of life shows I’ve seen in a long time. A lot of people think it’s a show about nothing which most slice of life stuff comes off as but Seinfeld was a show about nothing and it took off right? Not that I ever watched Seinfeld…Anyway, it’s a nice little show and it’s the little visual nuances that sets it apart from others out there. Those nuances is one of Kyoto’s specialties. So yes, Mr Switch gave this one a pretty high score. This isn’t just a slick produced moe show which hits you over the head with looks and smoothness to cover it’s faults. K-On! is 13 episodes but there are OVAs and a 2nd season which has 26 episodes and a movie too, so there is a lot more K-On! to go around.