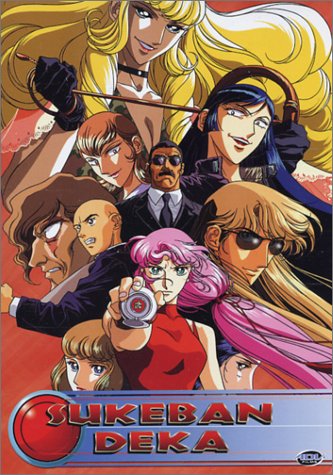 Sukeban Deka follows a ‘delinquent schoolgirl’ who is taken in by the government and forced to fight crime to redeem herself for her past and to also delay her mother’s death sentence. They give her a new name, Saki Asamiya, and a metal yo-yo which is also her badge. She has to infiltrate high schools around Japan to investigate and stop crimes.

The characters are very cartoonish like they were back in the 90s. Saki gets a sidekick, Sanpei who is more of an admirer who would do anything for her. He is very…awkward. You know how they usually have a female who is the ‘damsel in distress’ or sidekick who always ends up in bad situations where the hero has to save them? That’s him. He also has a high pitched voice which just makes his character awkward. The “enemies” who are also high schoolers are kind of over the top cartoony villains.

This show is from 1991 when anime was still in it’s infancy here in the US. For it’s time it was probably very good but now it’s very dated. It doesn’t have slick animation, opening and ending songs and all that. It’s a pretty standard crime style anime. It’s based on a manga from the 70s and that’s here the style comes from. This OVA is 2 episodes of about 50 minutes. There are several movies and shows based around this property too. So if it ends up being your kind of show, you can watch all that live action stuff.