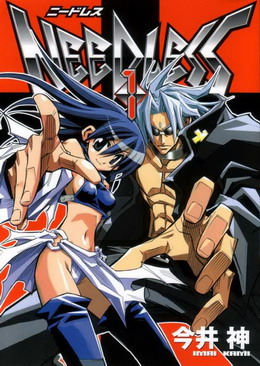 Needless is a show I bypassed when it came out but decided to give it a chance recently. Not even sure why I bypassed it before since dystopian future type of stuff usually draws me in.

The story takes place in a future where a Third World War has taken place. A war that has brought worldwide chaos and also creates room for a new species known as Needless. Needless are humans who have contracted a ‘disease’ that allows them to wield new powers that mankind could only dream of. They’re able to control gravity, telekenesis, adapting, elementals and several other powers that you only see in comic books.

The characters in this show are a colorful bunch. Cruz, the main protagonist is just a kid who gets separated from his sister. He’s pretty sure he watched her death. He goes on a hunt fr answers and comes across Adam Blade who he calls Mr Priest. Adam Blade is priest like and even spits out a few priestlike jokes about little boys and other things that are taboo. He’s an overpowered priest who has a score to settle and decides to help Cruz. Blade is accompanied by a scatterbrained female fighter named Eve. You will learn about their connection later in the show. Each character they come across is as colorful and cartoony as the next. They definitely make an impression.

While it was made in the late 2000s, it looks more like something you’d see in the 90s. This doesn’t take away from the show in any way though. I’d say everything about the show fits the theme and blends together well. Supposedly the gore and violence was toned down from the manga and the fanservice was upped. Well in terms of “fanservice”, it’s definitely there. There are some lolis who get way too much airtime and get stripped of their outfits. The show is kind of a typical show that would draw in teenage boys. High octane battles, girls, super powers, explosions, slapstick comedy, etc. The music for the show is metal and definitely stands out. Except for the random drops in art quality, this show has great production value.

Needless isn’t great or anything as I see it but the show is pretty good. If you’re looking for an action show with over the top personalities then this will fill the need.