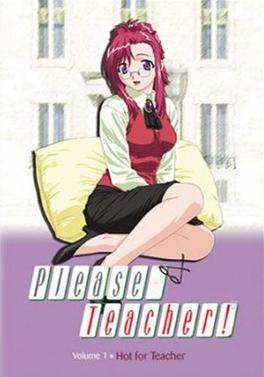 Onegai Teacher and Onegai Twins has a lot of carryover in characters. In both series, the main protagonist is put in a situation which is seemingly impossible but of course he figures out what he has to do. It is TV afterall and not real life where things never go as planned.

In Onegai Teacher, a boy with an issue of blacking out sees an alien landing but of course, he blacks out so he doesn’t believe it’s real. Then the next day he’s at school and the alien that he saw land is hs new homeroom teacher. Through a series of events, he learns of her origin and vows to protect her in any way he can. What he desn’t know is that it’s going to come in the form of marriage. The two get married and have to keep things a secret from everyone so that she doesn’t lose her job as a teacher. There are other consequences but her being his teacher and wife are their main worries. Can they keep the secret with so many things getting in the way?

In Onegai Twins, a boy named Maiku ‘inherits’ relatives. He has a picture of him and a relative in a pool but he’s not sure who the relative is. Then suddenly a girl shows up at his house claiming to be the one in the picture. After accepting that she may be the one he’s looking for, another girl with the same picture shows up claiming to also be his twin. So now there are 2 girls who end up living with him while they try to find out who is actually the twin and who is the stranger. Of course living in the house together leads to many situations which have romantic entanglements and it becomes an actual love triangle. Unlike most anime which would en when they figure out who is who, this one does go a little into the story of what happens after and so does the OVA.

The shows are from 2002 and 2003 and show their age if you’re to watch them now. They’re much more tame than anything from recent vintage. If you’ve seen My Wife is a High School Girl then you’ll have a feel for the show. The music, art and all that have that late 90s anime feel to them. So I’d call them average quality.

I liked both way back when and still like them now since I obviously just watched them again. If you’re looking for something more ‘wholesome’ then today’s love triangle, harem stuff then try these two. Check out Teacher for more of a straight love story and Twins for your harem fix.