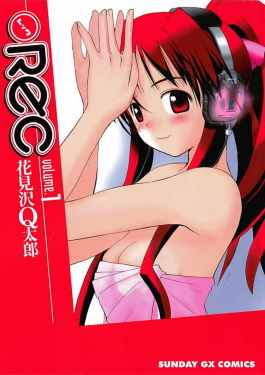 Rec is a short anime that came out a decade ago. It actually started airing in February of 2006. One look at the show and you can tell it’s from that timeline but it doesn’t look as dated as a lot of older shows do. If I said it came out this year, you might actually believe me.

Fumihiko is just an average working guy with no girlfriend. He invites a woman out from work and she stands him up. Another woman, named Aka, who happens to be passing by when he’s about to throw out the tickets, gets him to go see the movie with her instead. The two of them have dinner and then he walks her home when they find out they live in the same neighborhood. Unfortunately a mere few hours later there was a fire which burned her apartment down. Fumihiko being concerned, went to go see if Aka was okay but he finds her there in the rain, holding onto the last of her possessions. Fumihiko invites her to stay at his place and they begin a new relationship “more than friends and less than lovers” which they hide from their coworkers. Can the two co-exist with all the tensions growing between them?

This anime is only 10 minute per episode and only 9 episodes make up the whole series. So there isn’t much to talk about without killing the show. It’s definitely a more mature anime with a slower pace. Not many anime stick to the mature side of things like this one does. You didn’t get the usual campy feeling that you get from these shows, they had something that would resemble true feelings of anger and jealousy. I like the show and can recommend it for someone looking for a nice mature show.
[yasr_overall_rating]