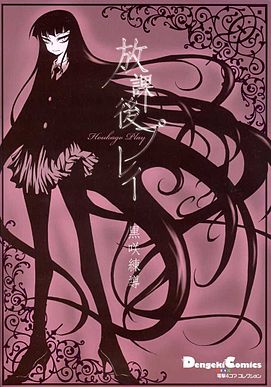 This is one that came up as similar to Ojojojo so I checked it out too. Ojojojo is a lot more of a heartwarming type comedy/gag manga where Houkago Play is…well some type of comedy but I personally got very few laughs out of it. I try to keep my feeling about something towards the end but there isn’t much to say about this one. I guess it was kind of popular among the otaku since the girlfriend has gotten several statues made.

Houkago Play is a short 16 chapter 4koma style manga. It’s about a high school kids who seem to be a couple or at least good friends since most of the manga takes place at the boy’s house. It’s  lot of them playing games and fighting with her being an extreme tsundere who seems to like kicking him or putting her feet on him. He takes it for the most part with a random comeback here and there. Their relationship does progress over time though it’s a short manga so you can’t really say “over time”.

I just found the characters both unlikable. He is probably like a lot of teenage boys but she’s the tsundere character you see in anime. He’s a runt and she’s tall just like in Ojojojo but that is pretty much where the comparisons end.