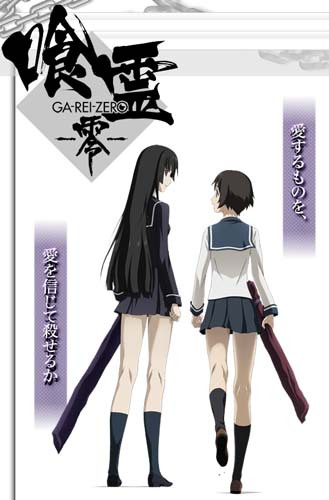 The show is about the Japanese Ministry of Defense and their anti-paranormal special forces called the Supernatural Disaster Prevention Office. They’re tasked with protecting Japan from supernatural and paranormal events. Of course there are missions that go awry and you’re dropped right into the middle of one from the beginning of the show.

Yomi and Kagura are in a yuri-ish relationship. Yomi is like a big sister to her but she also seems to be the one pushing the relationship into yuri territory, not that Kagura fights back much. Kagura is somewhat of an adopted daughter for Yomi’s family. Yomi reminds me of Akame from Akame ga Kill. But that’s almost every black haired, sword wielding girl in an anime. Must be some kind of rule or something over there. If she has a sword then she has to be a tall, thin, black haired tsundere. Yomi is teaching Kagura the ways of her work so that she can fight the supernatural too but what also comes into play is that Kagura’s family also fights demons. Just watch the show, it explains it better.

I’m not sure why people get on TokyoESP for having a flashback when it’s not a long one but this show is almost all flashback. Odd. This is the prequel to the manga so maybe that’s why they did it the way they did. There are 2 episodes at the beginning which basically are the end of the show, then a huge flashback on the relationship of the 2 girls, then wrap back around to the front.

The show has its slow parts because they gave the history of Yomi and . Those are kind of part of the story though and give you a little insight into the two characters. I like the show but it’s hard to recommend it. Hard to explain but don’t let the first two episodes deceive you into thinkng the show is ALL action. There is a lot though.