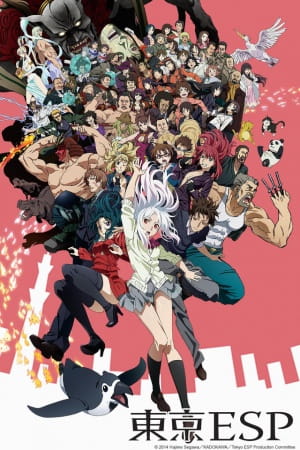 The story of TokyoESP starts with Rinka, a poor high school girl who lives with her father. One day on her way home from school, she chases a flying penguin to the top of Tokyo Tower. Then a strange phenomenon occurs. She sees flying goldfish and one of them ends up going through her body, giving her supernatural powers. The power to slip through solid objects.

The first odd thing about this show is the opening. How do you have a heroish show with a slice of life opening? The second is the closing which is kind of odd too for this kind of show. With that being said, the music was out of place. Everything else was typical of these type of shows.

You will notice Ga-Rei: Zero and TokyoESP get compared for some reason. The only thing in common is the writer. Kagura and Yomi do appear at the beginning of TokyoESP but they aren’t part of the story and it’s not even the same universe. Just to help clear that up if you’re looking around for info.

This show is kind of like Spiderman when he first got his powers and wasn’t 100% sure if he could be a hero. So it does have a slow build at the beginning but I suggest you stat with it because it’s a decent show. The show ended with a big possibility of a 2nd season but so far there has been no signs of a 2nd season. Decent show but I wouldn’t recommend it if someone asked. I’d probably throw it out there as “you might like this but no guarantees”.
[yasr_overall_rating]