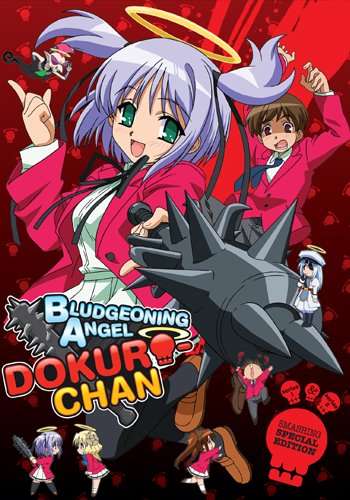 Bludgeoning Angel is a short style anime that’s 13 minutes per episode. The first season had 8 episodes and the second had 4. The “plot” is an angel coming back from the future to stop a boy who inadvertently learns how to stop aging and this leads to someone in the future making all girls in the world stop aging at the age of 12. Yes, she is trying to stop whoever becomes the pedophile king.

This show definitely has it’s ecchi tones but that’s where the problem comes in for me. This isn’t one of those shows that has one ecchi thing in the first episode and then does nothing else. There is ecchi in just about every episode. It gets worse in the 2nd season.

The main focus of the ecchi is Dokuro Chan though she brings it on herself sometimes but the sister angel is my main issue. She’s supposedly 9 years old but looks older. They could have had her be 19 or something. Instead it looks like pedophile bait. You will look and say she LOOKS older but she’s 9. Freakin 9 dude…

With all that being said, the show is one that came out right when the moe show explosion happened. It’s mixed between the old school style of art and moe look. There really is no content to this show, it’s just slapstick comedy and not very good comedy. Of course this is just my opinion, maybe you’ll like it. Who knows.