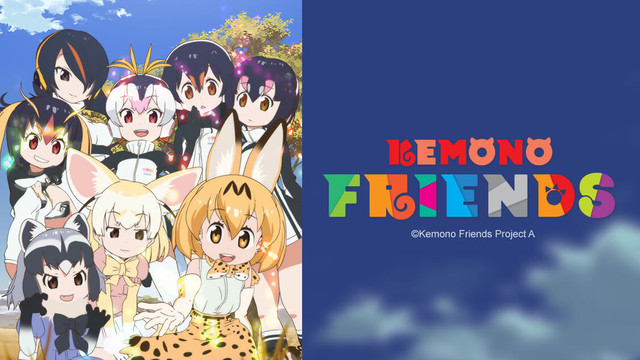 Well the season is over and I thought this would be the first one I threw out my thoughts about. Yes I know I have like 3-4 seasons to catch up writing about but anyway…

Kemono Friends, the anime that seemed to take Japan and fan art by storm. It’s crazy to think this show would be such a runaway hit. I doubt it is over here in the US but in Japan it definitely made waves.

The show is one that seems to be aimed at kids but it was on late at night which leads you to believe there is more to it than meets the eye. When you first look at the show you will probably say something like “what the hell is this”. It has some very very janky CGI, a friendly “meet the animals” type theme and it doesn’t give off anything that would seem more mature or adult. Though you can tell something apocalyptic happened. I will say the background art is okay.

The show starts off with a “human” who doesn’t seem to know who she is or what she is and animals who seem to be anthropomorphized through whatever method (this does get revealed). I don’t want to give up too many details because they are the main essence of the show. The human is paired with a serval which is probably not a very well known animal in the states but I guess there are a lot of them in Japan. Along the way they meet other animals who have also become anthropomorphized and help them in different ways. I will say the designs on the animals all make sense except maybe the hippo who seems more like a shapely and motherly presence compared to the others who really have no shape. If I was to draw a hippo then her design probably wouldn’t have been one I came up with.

The show is a very light affair which doesn’t provide much in terms of plot or anything. The show does have a central theme but each episode is pretty much self contained and they almost never leak into the next week until the end. People claim that Japan latched on hard because it’s a break from everyday drudgery which I can understand but it doesn’t offer much of anything. I guess you can count the facts about the animals when they appear and the interludes in the middle of the show where they show the actual animal and give some info but besides that I can see someone watching this with their kids. It’s light comedy but also educational. Though there are fight scenes and a few yuri moments.

I won’t recommend this show to anyone but it’s not as bad as you might think by looking at it. It’s a simple show that seems more kid based than adult but I guess I can see Japan’s view with wanting something to get away from everyday life.

There was a “To be continued” and the show director wants there to be more Kemono Friends so I expect to see more at some point. You had to be a detective to see it though. Anime Herald has a post on that. Can’t imagine there is much of a budget and it’ popularity will probably move games and manga or whatever is attached to it. The game died before the show came out and they claim there won’t be another but never say never.