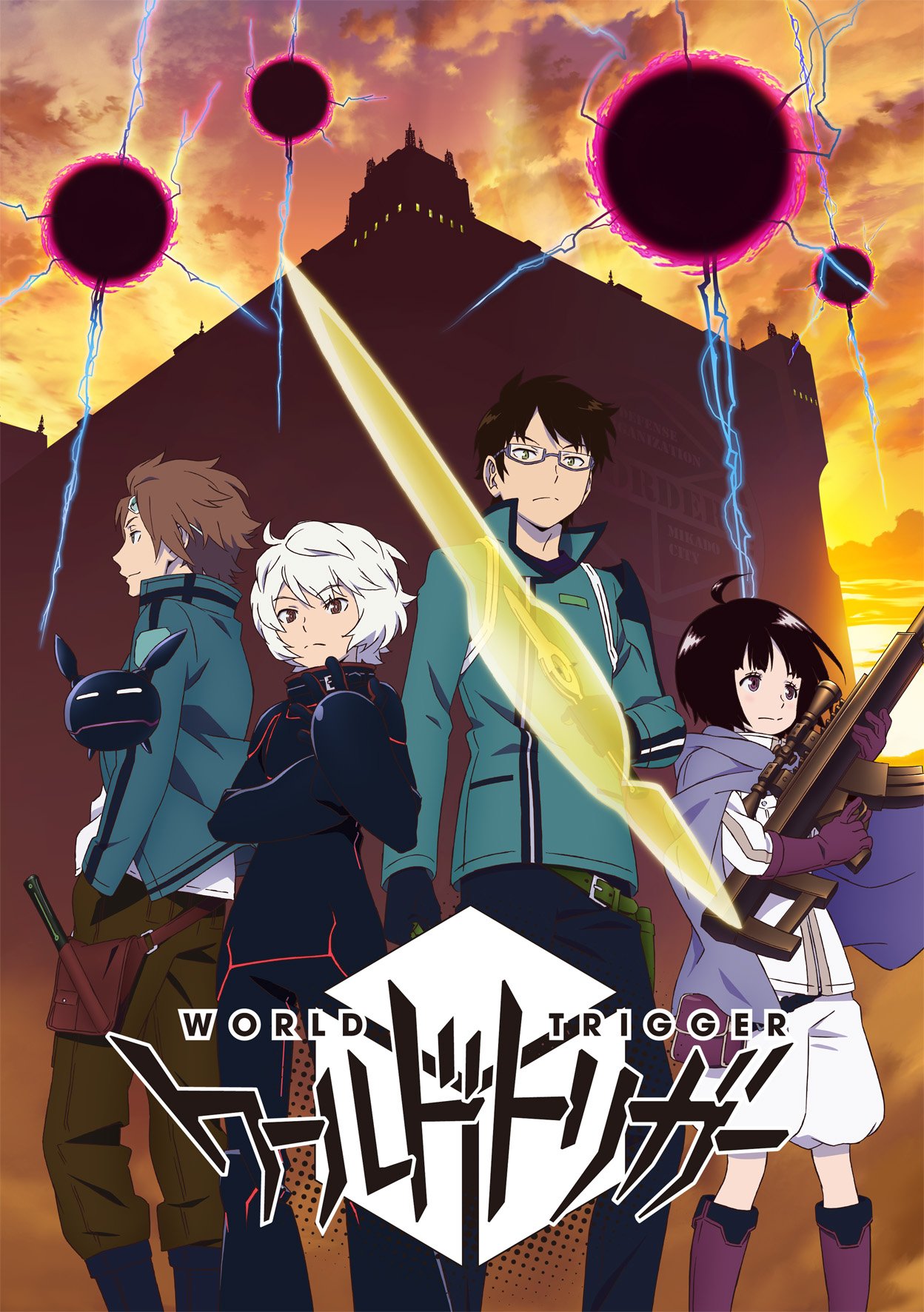 World Trigger was a show I got into because I was being bombarded with ads from Crunchyroll. At first I didn’t want to want the show because the “enemy” were called neighbors. Which seemed absolutely ridiculous at the time but those ads were relentless so I had to check it out. Another thing that got my attention was that the show was greenlit for 50 episodes and I’m tired of shows only getting 12 episodes to try to tell a story. Most shows end up rushed or unfinished due to the lack of enough episodes.

Brief synopsis: Mikado City is where the events of World Trigger take place. One day a gate to another world opens and these monsters known as ‘neighbors’ come through the gate. Of course everyone is afraid of them, especially since Earth weapons have no affect on them. Then a mysterious group known as Border enters the scene to fight them off. 4 1/2 years later, a new gate opens where Yuma comes to Earth. Yuma and Osamu meet at school where Yuma is adjusting to Earth life and Osamu looks like an ordinary student. Not too long after, a new gate opens and Osamu reveals he’s a Border trainee and tries to fight off the ‘neighbor’ but it’s too strong for him so Yuma joins the fray. This is only the beginning, trust me.

You don’t get to dwelve too much into the history of the characters because from the start it’s battle time but you do get a top layer of backstory on all of them. The action comes fast and quick for Osamu and Yuma. Osamu and Yuma become a duo almost by accident and later Chika joins their little group. Osamu is the de facto leader of the trio because Yuma is a ‘neighbor’ and not familiar with Earth and it’s customs. Chika is very young and needs guidance, she has her reasons for joining the battle too. You will be introduced to a lot more characters who will play major roles in the show.

Production on the show is mostly tight but kind of weird. The opening sequence is in the middle of the show and sometimes it will feel like the episode ended. Also the episodes feel short even though they are 20 minutes or so. The pacing of the show is good but then it slows down for a while around episode 35 or so. Though it does get back up to speed. In this show, when the action comes, it comes quick and in abundance.

I have no clue what they did here with the show. World Trigger was supposed to be 50 episodes and they seemed to be going in that direction. Then they announced a second season that is not based on the books/manga. Well episode 48 seems to be the end of the first season and it rolled right into the 2nd season from 49 with a severe plot change. No announcement of this change or anything. So now the episodes after about 35 feel like filler episodes. Either way, I like the show and would put this on the list if you’re looking for a long running show.

***I always meant to add this. World Trigger was cut short because the station it was on decided to go in a different direction with anime. It ended up having 73 episodes. It was panned by some anime watchers for being a bad adaptation of the manga but as you know, most anime fans and manga readers think they know everything. I didn’t read World Trigger but I’m sure it’s changed from the source material which a lot of shows are. Sometimes you need to make it more TV ready or whoever is producing makes changes they see fit. Sometimes it works, other times it doesn’t. So be it.