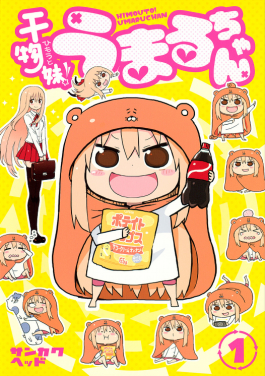 I was going to pass on this show when I saw the first image released for it. It was hamstergirl surrounded by her games and all that and that to me was passable. But when people kept talking about her like she’s Hestia or something, I had to check out what the hell was going on.

This show is centered around Umaru (guess that was kind of obvious), a high school girl who lives with her older brother Taihei. When she’s at school, she is the model student but when she gets home, she puts on this hamster cape thing and turns into an unbearable, inconsiderate, lazy, good for nothing, ultra otaku. All the negatives that are said about otaku, is what she is. So it’s about her life at school and home with the people around her.

When Umaru’s not in hamstergirl mode, she’s tolerable but when she’s being a lazy slug it’s just unwatchable. Why couldn’t she just be herself wearing the hamster thing instead of turning into a whiny, brat kid. I actually felt sorry for her brother. She has some awkward friends too but they’re likable. Like the shy Nana Ebina who has a crush on Umaru’s brother Taihei. Make a show about her. There’s also Kirie who has a very bad staring issue and she has trouble speaking to people except hamstergirl  because she’s a kid or at least portrayed as one. Then you have Sylphynford who is a competitive school rival, she’s “the rich girl” but actually has a heart unlike most of the ones in other shows. Of course there is also Bomber who is Taihei’s friend and also Kirie’s brother, he’s just a goofy character. But all these others would make a good show, ditch hamstergirl and I would have probably liked this show more.

I have no idea what people see here or why they think she’s “cute”. Whenever I see hamstergirl, I want to punch her in the face. Knowing that I don’t hit women, that says a lot. Eliminate all the times she turns into the lazy ass waste of a sister and you have an okay show but just okay. Nothing more than that.