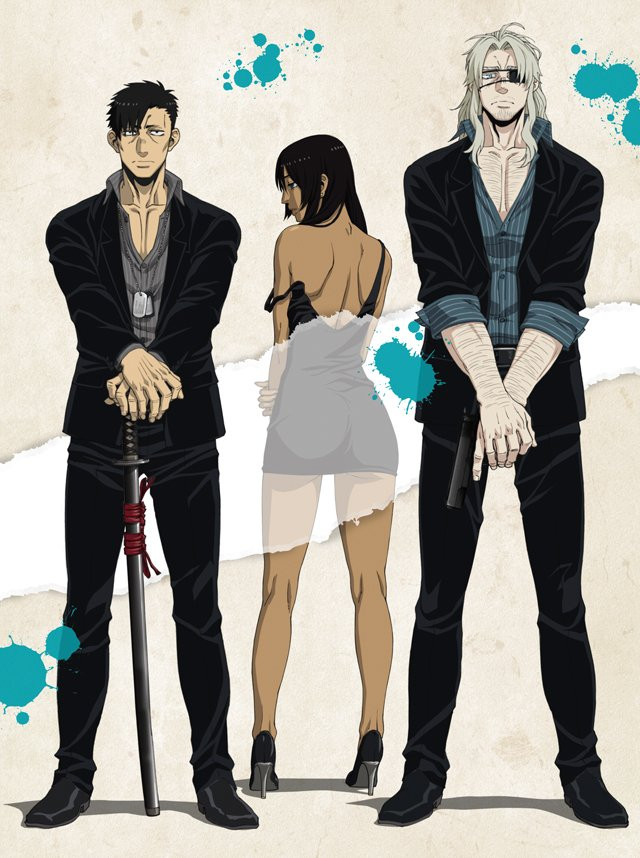 Gangsta was the one show that stood out to me from the summer schedule. It was just the name alone, Gangsta. By being “Gangsta” and not “Gangster”, you know it’s going to be different and not just the regular gangster stuff like racketeering though there is some of that stuff too.

The show is centered on two “Handymen” who take on jobs from the mob and also the police, that no one else can handle. Worick and Nicolas seem like they’ve been together for a long time in Ergastulum, a city full of mafia, hoods, prostitutes and dirty cops. Speaking of prostitutes, Alex, the woman you see with them, becomes a part of the team through unusual circumstances. Together they take on jobs, usually of the protection variety. There is more to the story than that but I’ll let you find that out on your own.

The show doesn’t use super high grade polished art, it goes for a more gritty style which fits the show. I’m not so sure on the music choices but I guess they kind of fit. The music in the beginning is a high energy type song which fits but doesn’t at the same time. Hard to explain but it’s not what I expected from a show named Gangsta.

Definitely one of the stand out shows from the summer season. If you want action, this is your show. Even with the few parts where the show isn’t moving, it’s still moving in the background. It did leave a feeling like the show wasn’t over though. I couldn’t tell if that was how they were ending it like it was a one season show or if it was the beginning to another arc. It kind of felt like both at the same time.

If you’re checking out the dubs, Ian Sinclair is Worick and he’s probably the best fit for the job. Him or Steve Blum would have worked. Watching the dubs, it just seems so natural. I’ll start watching the dubs over from episode 1 as soon as I get some time but after watching 3 or 4 of them, it’s definitely well done.